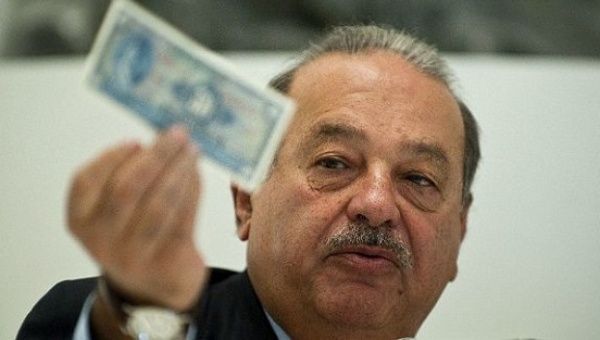 Billionaire Carlos Slim is planning to sell more than half of his 17 percent stake in the New York Times Co. to U.S. hedge fund investors, reducing his sway over one of the world’s most influential publishers.

Slim’s businesses earlier this month sold $250 million of mandatory exchangeable trust securities in a private offering that gives the buyers a claim on a 9 percent stake in the New York Times, according to a person with knowledge of the matter. The newspaper’s shares have surged more than 50 percent since Slim boosted his stake in 2015 and became the biggest shareholder.

The deal, which was referenced in a Dec. 6 statement but has gone largely unnoticed, means that when the securities mature three years from now and they automatically convert into Class A shares of New York Times, Slim and his companies will be left with about 8 percent of the publisher’s shares, said the person, who asked not to be identified because the information is private. In essence, the billionaire created a trust, pledged New York Times shares to it, locked the shares up for three years, then sold rights to that stock to investors.

Slim built his stake in the New York Times after lending the company $250 million in 2009 to help it get through the financial crisis. In 2015, he exercised stock options to become the Times’s biggest single investor in a display of confidence in the company even as readers and marketers flocked to the Internet where content is often free and ad rates are cheaper.

With the smaller stake, he’ll lose some of the power he had to vote for Class A directors, a group that can include no more than a third of board members. The Ochs-Sulzberger family — the paper’s controlling owners — hold Class B shares that give them a firm grip on the company. Publisher Arthur O. Sulzberger Jr. will retire at the end of this year after a quarter-century of overseeing the newspaper. His 37-year-old son, A.G., will take over.

Transferring the shares through the hybrid instruments allows Slim to take advantage of deferred tax payments until the transaction is completed, the person said.

Arturo Elias Ayub, a spokesman for Slim, confirmed the transaction. A New York Times spokesperson said the paper is “grateful for Mr. Slim’s confidence and support of the company” after he became a shareholder at a “critical” time in its history.

Technical investors such as hedge funds bought most of the securities Slim offered, perhaps seeking to take advantage of the arbitrage opportunity opened up by the deal, the person said.

In July, Slim’s family holding company Inversora Carso sold 521,500 Times shares — a fraction of its ownership and an amount representing 0.3 percent of the company, according to an SEC filing and data compiled by Bloomberg. Slim had said at the beginning of this year that the U.S. daily had been a good investment and that he wasn’t planning to sell his stake.

When Slim made his loan to the Times, the publisher was reeling from the global financial crisis and needed a cash infusion to buy time for asset sales and new strategic initiatives. The company agreed to pay 14 percent interest and granted Slim stock warrants to acquire his stake at a discount. The terms seemed onerous at the time but that ultimately let the Times dig itself out of a bad situation. The company paid back the loan in 2011, ahead of schedule.

Slim exercised the warrants in 2015 and has held on to most of the shares, benefiting from a 51 percent rally as the election of President Donald Trump drove demand for digital subscriptions from news-hungry readers.

Shares closed Monday at $18.60, still far off their high of more than $52 in 2002, back in the early days of the internet. Slim has said his bet on the Times was always about the value of the newspaper’s brand, which he figured would survive the upheaval of the digital age.

Before he was elected, Trump accused Slim of using his ownership stake in the Times to influence the paper’s coverage of him. The Times said Slim never affected coverage and a representative for the billionaire said Slim wasn’t interested in influencing the election.

MAGA: AT&T to Give $1K Bonuses to 200K Workers After Passage of Tax Bill