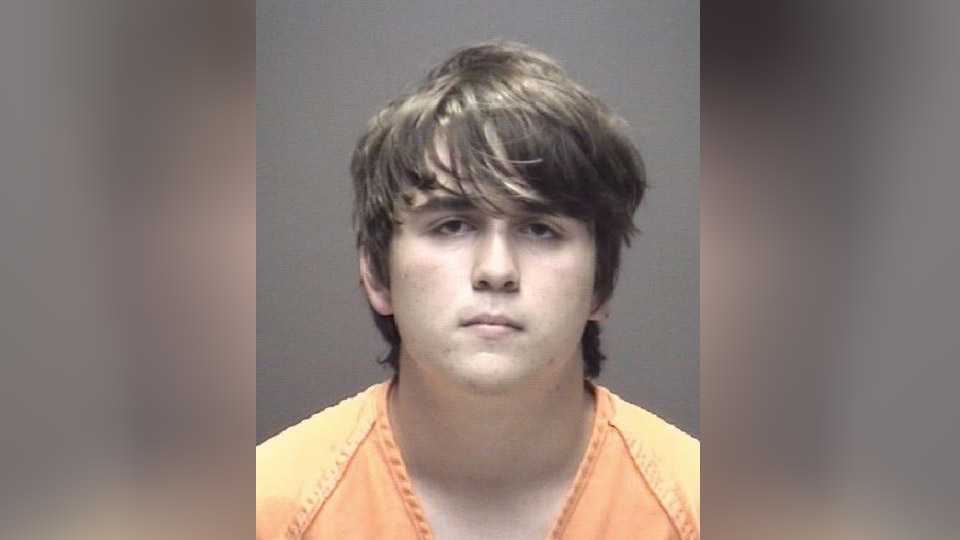 Around 7:40 a.m. CDT on May 18, 2018, Dimitrios Pagourtzis began to open fire in the art classroom at Sante Fe High School.  The shooter has been taken into custody, 10 people have been fatally shot, and 13 others have been wounded.

From the perspective of those who were there

“I was sitting in my classroom and I heard very loud booms and I didn’t know what they were.  I was confused but after I heard screaming, I figured out what they were, got up immediately and started to run.  I almost ran out of the school but I hid instead with the other students.  I was there for maybe 30 minutes I was on the phone with my mom the whole time.  They found us and escorted us.” – Paige Curry (student)

“I heard people were hurt and the gunshots were from a classroom maybe three doors down.  I heard five [shots] maybe.  It was one boom, then another boom very loud.  It wasn’t rapid.” – Paige Curry (student)

“You could smell the gunpowder that came from the gun.  We were all scared because it was near us.” – Liberty Wheeler (student)

“The teachers told everybody to run after three shots were heard so we all took off and ran into the trees.  Then we heard four more shots so we jumped the fence into some dude’s house and ran into a car wash.  While we were sitting down trying to figure out what just happened I saw a girl who had been shot in the kneecap.” – Tyler Turner (student)

“A kid came out.  He had a black-like trench coat on, a sawed-off shotgun with a pistol grip, and I seen something sharp on his chest.  Then, he turned, and instead of looking our way, he just grabbed the backpack and went right back into the art room.  We shut the door in our classroom, turned off all the lights, did everything we could to get the students safe.  Then, the teacher actually ran and pulled the fire alarm, because we had no service to call 911 to let anyone know that there was a shooter.” – Damon Rabon (student)

“He is a quiet boy.  You would never think he would do anything like this.” – Stelios Sitaras (Greek Orthodox Priest) 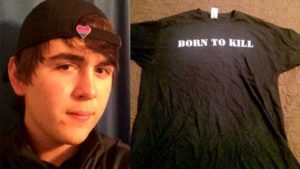 “He’s been picked on by coaches before for smelling bad and stuff like that and he doesn’t really talk to very many people.  He wears a trench coat every day and it’s like 90 degrees out here.  I heard that he wore a shirt today and it said ‘born to kill,’ the shirt he was wearing, I don’t even know how the school can allow that.” – Dustin Severin (student)

On April 30th, 2018, Dimitrios Pagourtzis posted a photo of his shirt that said “Born To Kill” on his Facebook.

Dimitrios Pagourtzis posted numerous images of his black trench coat that he wore during the shooting, which had fascist and occultic pins/decals. 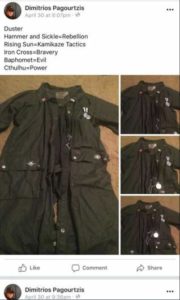 Dimitrios Pagourtzis also posted a photo of a handgun, knife and tactical flashlight to his Instagram page. 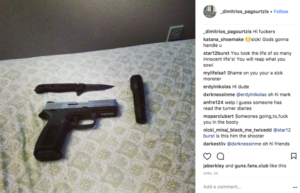 Law enforcement also reports that the suspect posted an image of a Pentagram with the caption “dangerous days” on the Friday before the shooting. 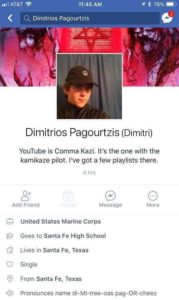 “There was about 30 seconds to three minutes of straight chaos,” said Damon Rabon.  While other students began to panic, Rabon and others who remembered the training they received acted upon their impulses.  “Me and a couple other students were like, ‘Get in the corner, we’ve done this before, grab the desk, barricade the door. We were doing all that like we were taught to do.”

The school district agreed last fall that it would begin to arm teachers under the Texas school marshal program, which is designed to arm teachers in order to protect students.

What if teachers were armed?  Could they have prevented more students from dying?  If more teachers volunteer to arm themselves in states that allow these programs, some of these atrocities might be prevented in the future.

The family of Dimitrios Pagourtzis released a statemement on May 19, 2018, saying that they are “shocked and confused” by what happened and the incident “seems incompatible with the boy we love.”

The shooter’s parents and classmates say that they saw no warning signs or any sort of trouble before the shooting.

These are the facts that have been released to the public so far, and as time goes on more will be revealed.

While evaluating all the evidence, eyewitness accounts, and stories, there is one conclusion that must be drawn from this event.

It starts in the home.

It starts with the parents.