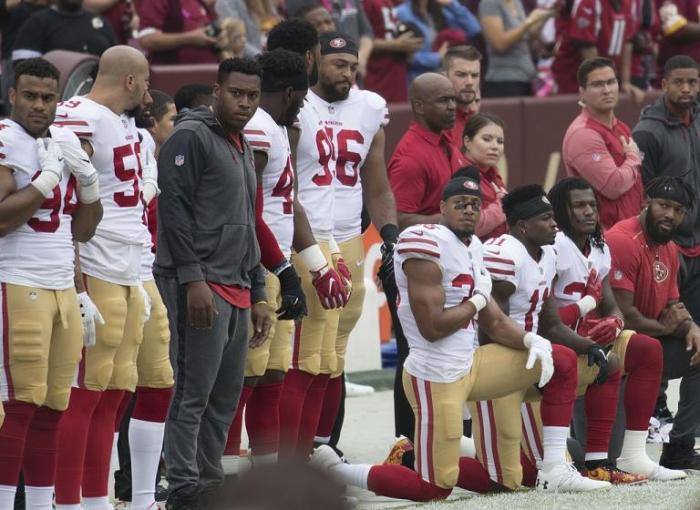 
In his second arrest in one month, San Francisco 49ers linebacker Reuben Foster was arrested in Los Gato, California on Sunday on suspected domestic violence and weapons charges.


Sarah Ravani and Eric Branch of the San Francisco Chronicle first reported the news Sunday, noting Foster is being held without bail. Robert Salonga of the Mercury News added Foster was also charged on suspicion of possessing an assault rifle….


As Twitchy points out, Foster was among a group of 49ers who followed the lead of their former teammate Colin Kaepernick in protesting “systemic racism” and police brutality during the performance of the national anthem at multiple games in the 2017 season.


Above is an image of Foster (#56) standing in solidarity in a group with his kneeling teammates during the performance of the National Anthem at their game against the the Chicago Bears on December 3. Below are shots of their protest before games against the Tennessee Titans on December 17 and the LA Rams on December 31.


​While getting arrested doesn’t necessarily negate anyone’s protest of what they perceive to be systemic problems in the criminal justice system, Foster’s situation certainly doesn’t help with public perception of the already divisive anthem protest movement. The protests, which dominated news coverage of the league for weeks last season, began during preseason in 2016 with Kaepernick’s declaration that he is “not going to stand up to show pride in a flag for a country that oppresses black people and people of color” and that racist police officers are “getting away with murder.”