As was with the answer to my Demographics question by Charlie Kirk on October 23rd (the third “Groyper” question of them all), insufficient, so is the entire ‘grifter right’ and gateway keepers answers on the right to legitimate concerns of Americans across the spectrum, left or right. Global, corporate, and government sponsored legal immigration, mass migration, demographic changes in Western Countries, the destruction of the Christian Religion, the Family, and the decrease in the value of labor.

Charlie Kirk embodies the 21st century establishment Libertarian side of the Republican party, being an ex-libertarian I can see how it’s appealing. However, as much as it is appealing it is even more destructive to our culture and politics than perhaps progressives. Giving up on key issues such as abortion, morals, religion, demographics, free trade, and open borders.

This is a fairly new hive-mind of new and old Republican talking points, however this ‘Corporate’ or ‘Conservative Inc.’ style control over the conversation on the right is leading us back into the same problems with middle of the ground “Conservative” leaders like John McCain and Mitt Romney, you can see the Alt-Lite gearing up to endorse Nikki Haley or Dan Crenshaw to be President in 2024. Attempting to usurp and hop on the Populist Wave Trump rode in on.

The same host of Never-Trumpers who now play ball as Trump supporters only to not be completely tarnished by Trump’s Populist base, are seething at the idea that the actual Conservative Right, who wishes to actually conserve Western Culture & Christian Values in America, instead of making this a “place holder” for Wood Stock and Wall-Street Culture, to continue to sacrifice the American Middle Class. This is also the same class of people who endlessly call for Wars in the Middle East at the behest of Israel, Saudi Arabia, etc, and criticize Trump on a regular basis of his “liberal” handling on the Middle East, aka withdrawing our Troops, and as Trump declares, “without a drop of blood.” Something that must really get the blood boiling of the Neo-Con Establishment.

It is ever imperative we make sure this establishment force within the Republican Party is shut out and completely shunned into the corner of Politics, along with failed trade deals, endless overseas wars, bail outs of the elites, and a slew of other misguided policies. The only way to keep these sell outs on their toes is to always ask them questions that can ultimately either continually expose their hypocrisy, or open their eyes to the truth, otherwise they will attempt to continue to use the “leftist” tactics of smear campaigns, silencing you, get you fired, etc. It is not so different from the Antifa tactics that are used of the far left.

why does everyone who hates nick fuentes look like this pic.twitter.com/Vutu1dYZRx

We’ve posted the graphic below of the continued “Groyper Wars” events and will be continuing the coverage of this: 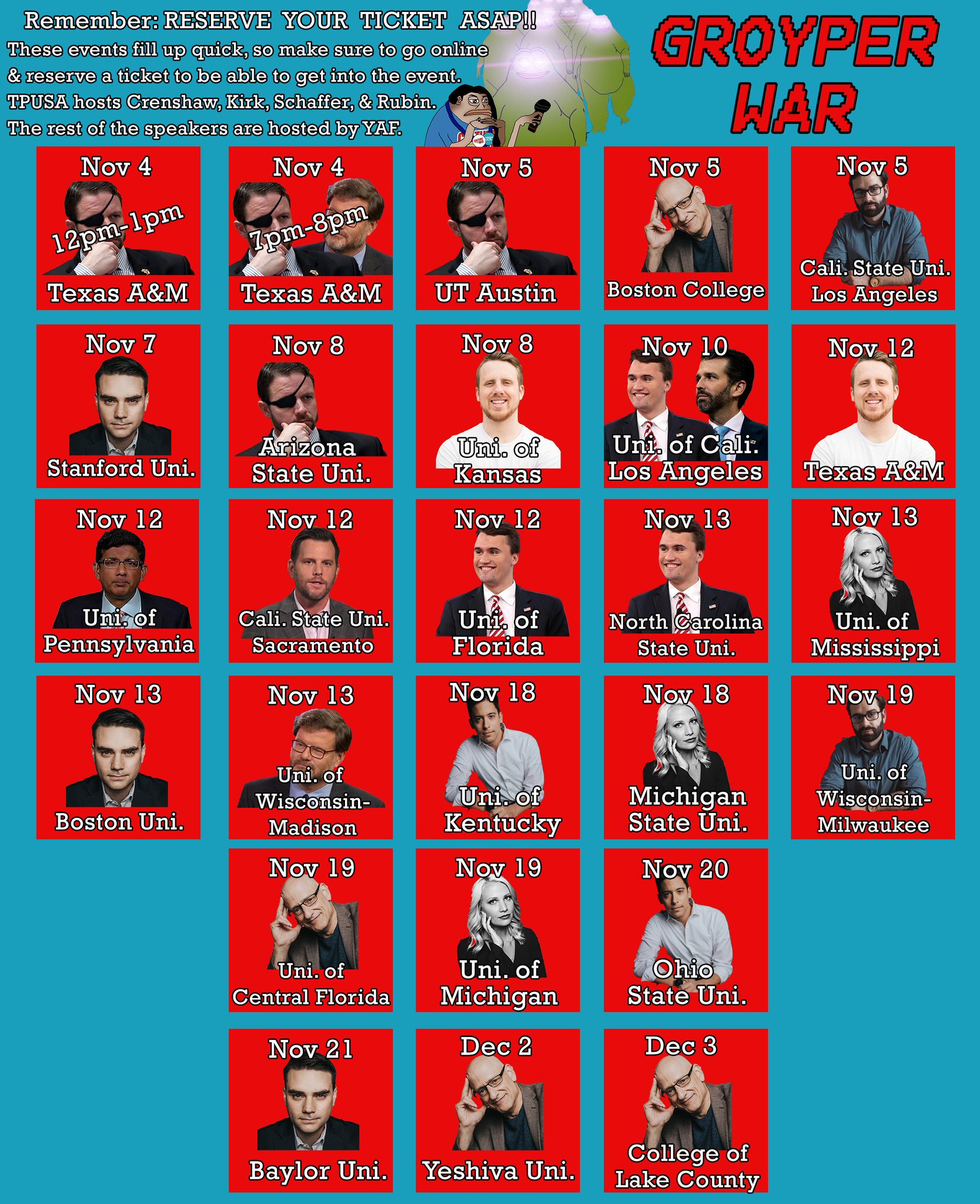