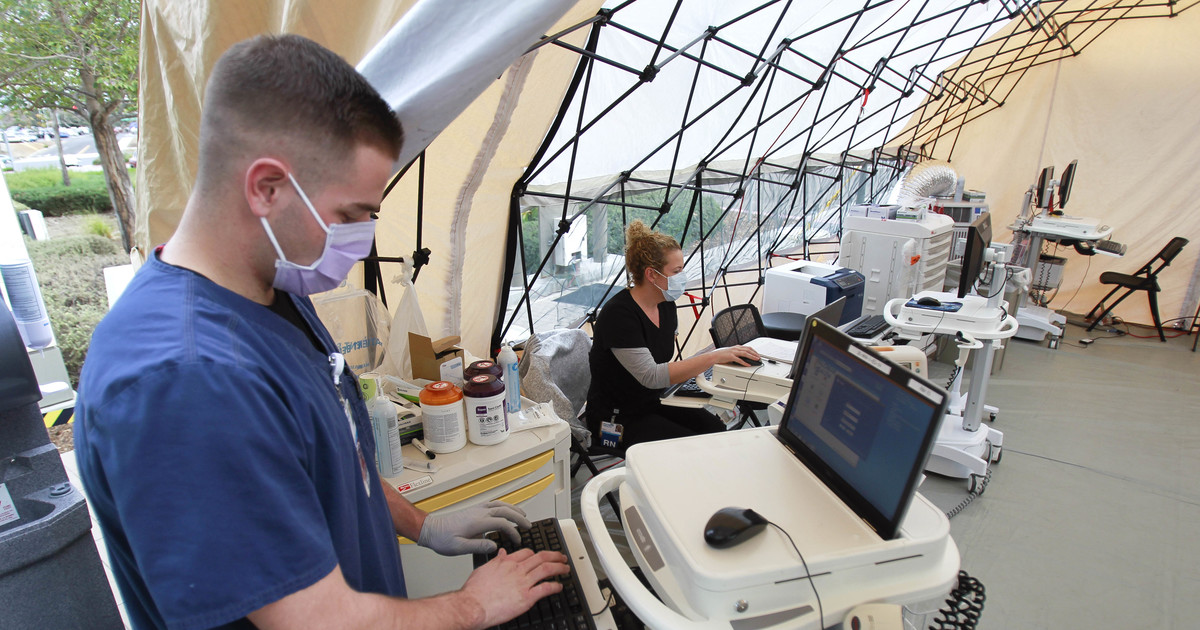 (Via The LA Times)

na Oktay rushed to the hospital in late December struggling to breathe, with a 102-degree fever and a cough that wouldn’t let up.

​​​​​She expected doctors to tell her she had pneumonia or bronchitis.

An influenza A strain known as H3N2 is making people so ill in California that thousands have shown up in recent weeks at hospitals struggling to fight the infection.

“I was flat on my back and in bed for 10 days,” said Oktay, who lives in Palms. “This has been hands down the worst flu I’ve ever dealt with.”

The huge numbers of sick people are also straining hospital staff who are confronting what could become California’s worst flu season in a decade.

Hospitals across the state are sending away ambulances, flying in nurses from out of state and not letting children visit their loved ones for fear they’ll spread the flu. Others are canceling surgeries and erecting tents in their parking lots so they can triage the hordes of flu patients.

“Those are all creative things we wouldn’t typically do, but in a crisis like this, we’re looking at,” said Michelle Gunnett, a nurse who oversees emergency services for a Southern California hospital system.

Staff members at Torrance Memorial Medical Center have been working long hours to care for a swell in sick patients that began in late December, said Dr. James McKinnell, infectious disease specialist. Some patients are incredibly ill with multiple strains of the flu, or the flu and pneumonia.

“There’s a little bit of a feeling of being in the trenches. we’re really battling these infections to try to get them under control,” McKinnell said. “We’re still not sure if this is going to continue … but it certainly is an inauspicious start.”

Coping with the crowds


Connie Cunningham and her staff at Loma Linda University Medical Center were triaging so many flu patients after New Year’s that they assembled what looks like a giant, brown camping tent in their emergency room parking lot. Several hospitals in California are treating flu patients in so-called “surge tents” intended for major disasters.

On a recent weekday morning, Cunningham walked through the tent, lined with folding chairs and patient beds that are separated by sheets hung from the ceiling.

Cunningham, executive director for the hospital’s emergency services, said she’d thought they would dismantle the tent after a few days, but staff are still treating 60 more patients each day than usual, she said.

“In my career, I’ve never seen anything like this,” she said.

H3N2 is known for being more virulent than other strains of the flu. Since October, 42 people in California younger than 65 have died of the flu, compared with nine at the same time last year, according to state officials. State officials collect flu death data only among people under 65; the actual death toll from the flu is much higher.

Officials say it’s unclear whether the recent upswing in cases means the season is peaking early or this year’s season is just particularly bad. Typically, the flu season, which runs from October through May, reaches its height in February.

“It’s like trying to surf a tsunami,” said Dr. Brian Johnston, an emergency medicine doctor at White Memorial Medical Center in Boyle Heights. “Maybe the wave has crested, one hopes.”

Palomar Medical Center Escondido in northern San Diego County also pulled out a flu tent this month, but was still so busy that some patients were treated in the hallways, said Gunnett, a nurse who oversees their emergency services.

Now they’re running low on beds because many patients were admitted with severe flu. Gunnett said she has started canceling scheduled surgeries and turning single-patient rooms into doubles to free up space.

At Good Samaritan Hospital in San Jose, hospital staff noticed flu cases were mounting and began clearing out an area that was being used as storage.

“It seems like we’re setting a record almost every day,” said Dr. Dave Feldman, medical director of the emergency department.

On Thursday, the former storage area opened as an extension of the emergency room.

‘A flu war zone’ in the emergency room
When Candysse Miller took her 88-year-old father, who lives in Redlands, to a nearby emergency room on Jan. 6, it was standing-room only. Many people crammed in the small space were sneezing and violently coughing, she said.

“It was like a flu war zone,” said Miller, a writer. “I’m not a germophobe or anything, but that will quickly make you one.”

Some administrators at hospitals with long wait times and crowded ERs have asked people who aren’t severely ill to not seek medical treatment. Others concerned about the spread of illness within their walls have also started restricting who can enter the hospital.

Dominican Hospital in Santa Cruz recently reintroduced rules they hadn’t used since the 2009 pandemic of swine flu, or H1N1. People under 16 — who are considered more likely to spread the flu — aren’t allowed to visit people at the hospital, and patients can have only one visitor at a time, said hospital president Dr. Nanette Mickiewicz.

“As we did during H1N1, we pulled out the same policies,” she said. “We’ve been treating almost five times the number of influenza patients that we typically see.”

Many hospitals also say they’re too full to accept any more patients or ambulances.

And when paramedics are allowed to drop off patients at a hospital, the emergency room is often so crowded that there aren’t available staff members to transfer care to. So the emergency responders can’t get back on the road to answer incoming 911 calls, said Kay Fruhwirth, L.A. County’s assistant director of emergency medical services.

“If there’s not a nurse available, and/or a bed — it’s usually an ‘and’ — they’re waiting there with the patient,” she said.

Healthy people get sick too
Children, elderly people and pregnant women are most at risk of becoming extremely ill if they get the flu, but anyone can get very sick, said McKinnell, of Torrance Memorial.

“We have patients every year — young, healthy patients — that end up in the hospital even on a ventilator for months because of influenza,” he said. “It would be foolish for people to think, ‘I’m 40, I’m healthy, I don’t need to worry about influenza’ — that’s not true.”

Doctors say that people who haven’t yet gotten the flu shot should still get it. It takes about two weeks to take effect.

National health officials predict the shot may only be 30% effective this year, though the vaccine can reduce the severity and length of the illness for those who get sick.

In L.A. County alone, “even a 30% effectiveness rate can prevent hundreds if not thousands of hospitalizations, and really save lives,” said the county’s interim health officer Dr. Jeffrey Gunzenhauser.

Already, so many patients have ended up in the Torrance Memorial ICU with the flu that caring for them has taken a toll on staff, McKinnell said.

“These people come in very, very sick,” he said. “There’s a lot of emotional stress that goes into that, because you care about your patients, you really want them to survive.”

Apple Repatriating Billions In Overseas Money, Will Contribute $350 billion To The US Economy Over 5 Years