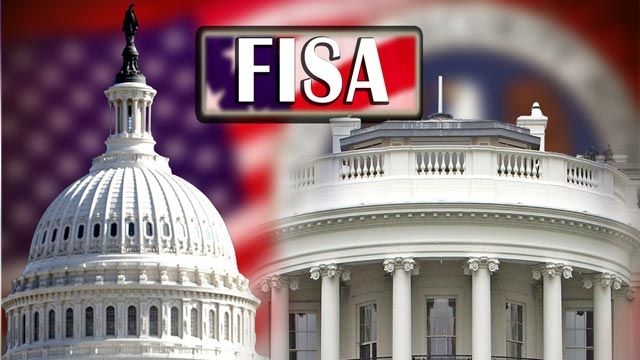 
It can be difficult to see through the wording to understand the accurate story.


Sara Carter and Fox News are both confirming the DOJ and FBI used the Steele Dossier to get FISA-702 Data Surveillance Authority allowing them to spy on Trump campaign officials.

In the latest developments, as reported by Sara Carter and Fox News, the DOJ and FBI used the sketchy ‘Steele Dossier’ as the foundation for their FISA application.

Both Carter and Hannity use the term “FISA Warrants”, however in the interest of understanding, and accurately portraying what took place, it was not technically a “warrant” as we traditionally think about it.

The FISA database, run by the NSA hub, already holds all the information, all the emails, texts, phone calls etc. The information already exists in a database. There are two steps to access the database of information:

♦Step One is to “Query” the database for your subject. That search needs a factual legal reason to take place; like an ongoing investigation. That search then returns an outcome, a set of information based on the “query” parameters. If the user gets a positive response to the “query” then Yes, the database holds information related to what they are looking for. Remember, there has to be a preexisting investigation to do the query.

♦Step Two is to “Open” the data set. That’s the step that needs a “search warrant” to be legal. That second step, the ‘looking at the information’ is where an approval from the FISA court is needed. The investigator must fill out a FISA application and go to the FISA Court for approval. In order to get a FISA Court approval the investigator must show a valid reason for the search.

As reported by Sara Carter and Fox News, the DOJ and FBI used the sketchy ‘Steele Dossier’ as the foundation for their FISA application.


•Step One: The DOJ/FBI official puts “Jared Kushner” into the search query. This generates a number of responses. Perhaps his emails, phone call logs, actual intercepted recordings of his calls, or text messages, etc. (everything the NSA hub captures “about” Jared Kushner). There has to be a valid investigative reason in this step. An investigation of Jared Kushner must be underway.

In 2016 NSA Director Admiral Mike Rogers noted there were numerous FISA-702(17) unauthorized “About Queries” being conducted by the intelligence community. These are queries that did not have an underlying investigation to support their taking place.

In essence, government officials were searching the system for information “About” U.S. principals not under any legal investigation. On October 26th 2016 Admiral Rogers reported those unauthorized searches to the FISA court and shut down the “About Query” process permanently.

SARA CARTER – The unverified dossier alleging connections between President Trump’s campaign and the Russians was used as evidence by the FBI to gain approval from a secret court to monitor members of Trump’s team, this reporter has learned.

A large portion of the evidence presented in the salacious 35-page dossier put together by former British spy Christopher Steele, has either been proven wrong or remains unsubstantiated. However, the FBI gained approval nevertheless to surveil members of Trump’s campaign and “it’s outrageous and clearly should be thoroughly investigated,” said a senior law enforcement source, with knowledge of the process.

Multiple sources told this reporter that the dossier was used along with other evidence to obtain the warrant from the Foreign Intelligence Surveillance Court, known as FISC. The sources also stressed that there will be more information in the coming week regarding systemic “FISA abuse.”

“(The dossier) certainly played a role in obtaining the warrant,” added another senior U.S. official, with knowledge of the dossier. “Congress needs to look at the FBI officials who were handling this case and see what, if anything, was verified in the dossier. I think an important question is whether the FBI payed anything to the source for the dossier.” (read more)

President Obama’s political operatives within the DOJ-NSD were using FISA 702(17) surveillance “about inquiries” that would deliver electronic mail and phone communication for U.S. people (Trump campaign). The NSD unit (John Carlin) was working in coordination with the FBI Counterintelligence Unit (Bill Priestap, Peter Strzok etc.) to look at Trump campaign activity. DOJ Attorney Lisa Page was the intermediary between the DOJ National Security Division and he FBI Counterintelligence Division.

All research indicates the information the DOJ and FBI collected via their FISA-702(16)(17) queries, and the stuff Fusion GPS was creating via Christopher Steele (The “Russian Dossier), was used to create the Russian Narrative, “The Insurance Policy“.

♦Ultimately, the people within all of these unlawful intercepts of information is what Devin Nunes discovered when he looked at the “unmasking requests” which were a result of those FISA 702(17) collections on Team Trump. That’s why Devin Nunes was so stunned at what he saw in February and March 2017.


The ENTIRE SYSTEM of surveillance and data collection was weaponized against a political campaign. They used the FISA Court to gain access to private data in order to monitor the Trump campaign and conduct surveillance on the officials therein.