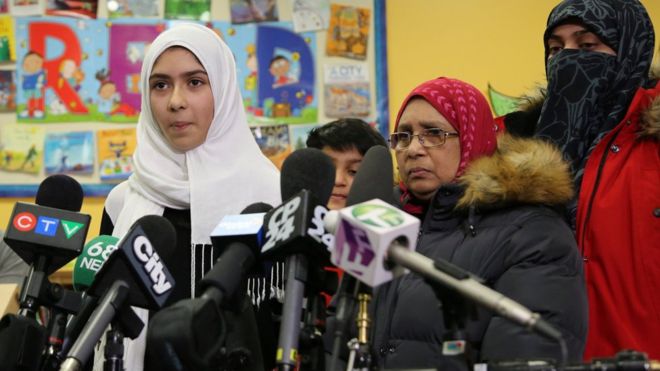 On Tuesday, a woman who was the Director of Education for the Canadian Civil Liberties Association and Education Trust from 1988 to 2016 decided to weigh in on the controversy swirling around the 11-year-old Muslim girl who falsely claimed an unidentified man had repeatedly attempted to cut her hijab.

Writing for Huffington Post Canada, Danielle McLaughlin asserted that the public owed Khawlah Noman, the Muslim girl, an apology for giving so much attention to the story. She commenced her argument by stating, “When did we assign this level of attention to a child’s stories? There is a girl in Toronto who needs a lot of patience and understanding.”

McLaughlin allowed, “The child’s brother reported that he had been witness to it all. The girl described her attacker and the event in some detail. … After the police went to the media with the story, a press conference was held in the child’s school, and she was interviewed by numerous media outlets. Political leaders from three levels of government responded with shock and horror. Even CNN picked up the story. Many people said, ‘This is not Canada.’”

McLaughlin wrote, “Then the police investigated further, only to find that the story was untrue. It had not happened. Actually, something DID happen. A girl, for reasons we will never know, felt the need to create a story that quickly got away from her.”

Felt the need to create a story? As in, lied? Since when is it okay to lie?

McLaughlin snaps, “Did she call a press conference? That seems unlikely. Did she ask the police to release the report to the media? Also rather unlikely.”

After sniffing that she has known “quite a few 11-year-old girls in my life. They can be bossy, rude, mean, angry, independent, easily influenced, sweet, kind, vulnerable, confused, frightened and deeply in need of attention, all at the same time,” McLaughlin finally gets to her point:

Hold on a minute. Here’s what Noman said at the press conference, in addressing her supposed attacker: “What you’re doing is really wrong, you should not act like this, and especially, I’m a kid.”

It certainly appears as if the girl was using the fact the she was “a kid” to engender sympathy for the alleged attack, rather than to excuse herself for lying, doesn’t it?

McLaughlin concludes, “I repeat that I know nothing about the child in Toronto or her reasons, but I do know something about the teaching of ‘stranger danger.’ What could be easier than instilling in children a fear of ‘the other?’ Even though we know that children are most at risk of harm from their own family members and friends, we continue to scare them with the bogeyman. So don’t be surprised when a scared child is interrogated and comes up with her own personal bogeyman. As for the rest of us? Let’s just get a grip!”

Here’s an idea for McLaughlin: Teach children that when they lie, nothing good can come from it.

In Depth Look At Why California Has The Largest Homeless Problem

L.A. Got Billions For “Homeless Initiative”; Where Did The Money Go?