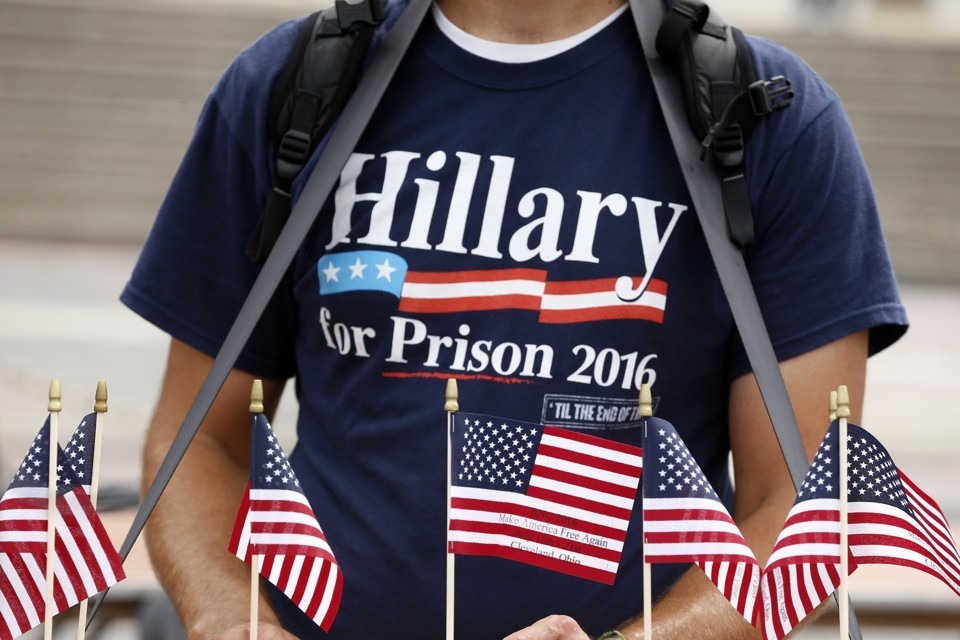 A month ago, Trump took a direct shot (one of many, actually) at his own “Justice” Department for not following up on what many in the country believe to be a fraudulent investigation by the FBI that cleared Hillary Clinton of crimes far greater than those which Special Counsel Mueller has alleged against Trump allies like Michael Flynn.

Alas, according to an exclusive report from the Daily Beast, citing sources close to Attorney General Jeff Sessions, Hillary’s email problems may be just getting started as the DOJ has allegedly decided to “take a fresh look” at the FBI’s investigation of her private server.

Justice Department officials are taking a fresh look at Hillary Clinton’s use of a private email server while secretary of state, The Daily Beast has learned.

An ally of Attorney General Jeff Sessions who is familiar with the thinking at the Justice Department’s Washington headquarters described it as an effort to gather new details on how Clinton and her aides handled classified material. Officials’ questions include how much classified information was sent over Clinton’s server; who put that information into an unclassified environment, and how; and which investigators knew about these matters and when. The Sessions ally also said officials have questions about immunity agreements that Clinton aides may have made.

Stephen Boyd, who heads the Justice Department’s Office of Legislative Affairs, appeared to hint at the department’s interest in Clinton’s emails in a letter to House Judiciary Committee Chairman Bob Goodlatte on Nov. 13. In the letter, Boyd wrote that that Sessions “directed senior federal prosecutors to evaluate certain issues” the chairman was concerned about. He also wrote that those prosecutors would “make recommendations as to whether any matters not currently under investigation should be opened,” and that they would sen dthose recommendations directly to the attorney general and his top deputy, Rod Rosenstein.

A spokesperson for the Justice Department refused to confirm or deny the story from the Daily Beast.

Ironically, this new information comes just one day after a mysterious fire broke out at Clinton’s home in Chappaqua, NY…Destroying evidence can be very dangerous perhaps…

Of course, as we’ve pointed out numerous times over the past year and half, the FBI’s, or more accurately James Comey’s, decision to not proceed with any charges in the Hillary email investigation has confounded many Americans given the FBI’s own documentation of what clearly seems to be intentional criminal activities. Take for example, the time that Hillary and her staff clearly instructed their IT manager to delete emails despite full knowledge of a subpoena from Congress (see: The “Oh Shit” Moment: Hillary Wiped Her Server With BleachBit Despite Subpoena)…

Then, on March 4, 2015, Hillary received a subpoena from the House for all of her emails on her personal servers.

Which brings us to the “Oh Shit” moment.

Therefore, sometime within the 6 days after a call with “President Clinton’s Staff,” that PRN server was wiped clean using BleachBit despite the subpoena from the House Select Committee on Benghazi received weeks earlier on March 4, 2016.

Not to mention the follow-on crime committed when Paul Combetta at first lied to the FBI about deleting the emails but subsequently “remembered.” So, what did Combetta get for committing perjury? Surely, he was rewarded with an indictment…just the same as Michael Flynn, right? While that might make sense to some folks, unlike Flynn, Combetta received a sweet immunity deal for lying to the FBI instead of an indictment…(see: The “Oh Shit” Guy That Wiped Hillary’s Server With BleachBit Was Just Granted Immunity).

Meanwhile, lets not forget the clear political bias of the FBI, obstruction of justice by Obama’s attorney general, etc…

Bill Clinton Holds ‘Private’ Meeting With Loretta Lynch As FBI Probes Hillary
Of course, the key question is whether this is all just another distraction gimmick being employed by the White House or whether Trump intends to make good on another campaign promise…

Trump: “If I win, I am going to instruct my attorney general to get a special prosecutor to look into your situation because there has never been so many lies, so much deception.”

Clinton: “It’s just awfully good that someone with the temperament of Donald Trump is not in charge of the law in our country.”

Trump: “Because you’d be in jail.”

BOMBSHELL: At Least One Of The Four Memos Comey Passed To NYT Contained Classified Info