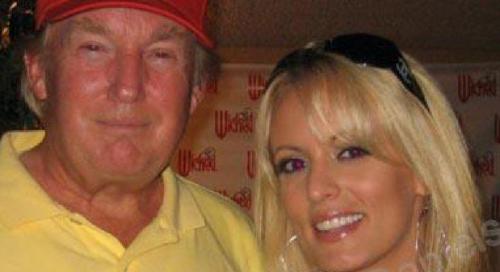 As if the weekend news cycle wasn’t crowded enough already.

With “shithole-gate” still dominating the headlines, possibly steering the federal government toward its first shutdown in five years, the Wall Street Journal has picked this weekend to revive a rumor that it first published shortly after the election, and which President Trump’s lawyers have previously denied.

The paper described a plot by the Trump campaign to pay off an adult film actress who had been negotiating with Good Morning America for an exclusive interview about her brief affair with the president in 2006, just one year after he married Melania Trump.

According to the WSJ, Trump lawyer Michael Cohen arranged a $130,000 payment to the Stephanie Clifford, who 10 years ago was one of the biggest adult film stars in the US, working as “Stormy Daniels.” In exchange, she had to sign an NDA barring her from discussing her experiences with Trump.

While the WSJ had previously reported the rumor about the GMA negotiations, the paper’s latest report goes much further. It describes how Cohen arranged for the payment to be made through Clifford’s lawyer, and how Clifford signed an NDA explaining she couldn’t talk about it… which she apparently is doing now.

Clifford claims that her encounter with Trump was consensual, and the White House dismissed the story as a “recycled report”.

“These are old, recycled reports, which were published and strongly denied prior to the election,” a White House official said, responding to the allegation of a sexual encounter involving Mr. Trump and Ms. Clifford. The official declined to respond to questions about an agreement with Ms. Clifford. It isn’t known whether Mr. Trump was aware of any agreement or payment involving her.

In a statement, Mr. Cohen didn’t address the $130,000 payment but said of the alleged sexual encounter that “President Trump once again vehemently denies any such occurrence as has Ms. Daniels.”

In addition to the rumors about Clifford, a separate rumor circulated last year that David Pecker, the owner of the National Inquirer and a staunch Trump ally, paid a former Playboy centerfold $150,000 to kill a story about her experiences with the then-candidate.

While WSJ wasn’t able to speak with Clifford, Cohen was kind enough to send over a two-paragraph statement by email addressed “TO WHOM IT MAY CONCERN” and signed by “Stormy Daniels” denying that she had a “sexual and/or romantic affair” with the president.

“Rumors that I have received hush money from Donald Trump are completely false,” the statement said.

After the agreement, Clifford’s camp complained the payment wasn’t being made quickly enough and threatened to cancel the deal, some of the people familiar with the matter said.

Clifford first met Trump when she was 27, at the American Century Championship in 2006, held at Edgewood Tahoe golf course in Nevada. Another adult-film star, Jessica Drake, later alleged in an October 2016 news conference that Mr. Trump kissed her and two other women without permission in a hotel suite after the same 2006 golf event – allegations that the White House called “false and ridiculous.”

Setting aside the question of whether the rumor is true or not, even if it is, would these allegations have the slightest impact on Trump’s popularity after, well, everything that has happened in the past year? We doubt it.

$830 Million In Missing “Helicopters As First Audit Begins Of Army