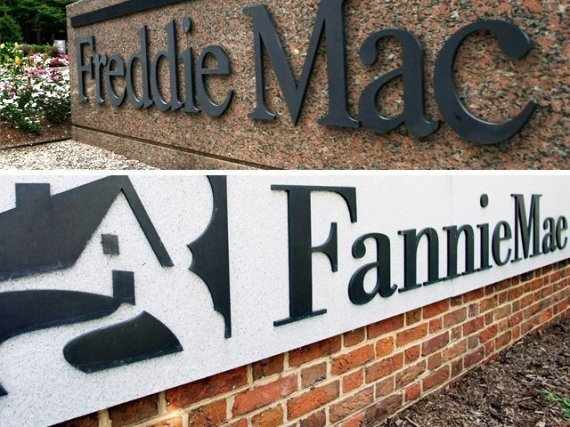 Since the US government nationalized the two GSEs in 2008 in a $187 billion bailout of the mortgage giants, there have been consistent calls for them to be wound down and for the private sector to fill the void. As we discussed, this view is, or was, shared by new Fed Chairman, Jay Powell.

Mr. Powell has called on Congress to overhaul the housing finance system, saying he’d like to see the country’s two large mortgage-finance firms, Fannie Mae and Freddie Mac, move out from under government conservatorship. More private capital in those firms would reduce the risk of a taxpayer-funded bailout in the event of a downturn, he said in a speech in July. Although the Fed isn’t responsible for housing finance, it supervises some of the country’s largest lenders who frequently sell their loan to the two agencies. “No single housing finance institution should be too big to fail,” he said.

In August this year, Fannie and Freddie’s regulator, the Federal Housing Finance Agency (FHFA), published the results of its latest annual stress tests on the two GSE’s. The FHFA outlined a “severely adverse” scenario in which US real GDP decline 6.5%, the unemployment rate rises to 10.0%, equity prices decline almost 50%, home prices decline 25% and commercial real estate prices by 35%. Under these conditions, it estimates Fannie and Freddie would need a bailout of up to $100 billion in the form of a draw on the Treasury (depending on how they treat assets to offset tax). Mortgages guaranteed by Fannie and Freddie amount to about $4 trillion and account for about 40% of the total US market.

Sadly, after almost a decade of federal ownership, the hope that Fannie and Freddie could be wound down has evaporated. Senators on both sides of the political divide have concluded that they are too big and too risky to replace. Proposed legislation in 2018 will see them retained at the centre of the US mortgage industry, rather than replacing them as a previous senate proposal tried and failed four years ago. According to the Wall Street Journal.

Lawmakers in both parties and the Trump administration are negotiating overhauls of the two companies—critical to home mortgages but in government conservatorship since the financial crisis—that could keep them at the center of the U.S. mortgage market for years to come, abandoning long-stalled proposals to wind them down, people familiar with the matter said.

Bipartisan Senate legislation set to be introduced in early 2018 marks the clearest sign of this reversal and shows how the companies, entering their 10th year under federal control, have proven too risky to attempt replacing. The housing market has seen strong demand in recent years, driven in part by steady access for many Americans to 4% or lower 30-year fixed-rate mortgages, thanks in part to a government backstop of the companies. Advancing legislation to refashion the nation’s $10 trillion mortgage market is a heavy political lift and may yet sputter during the coming midterm-election year, as a prior Senate effort did four years ago. One big difference this time around: a more incremental approach largely reliant on the existing housing-finance framework.

The new plan, proposed by Senators. Bob Corker (R., Tenn.) and Mark Warner (D., Va.) could be introduced as early as next month. Instead of a new mortgage-finance system, Fannie and Freddie will be retained under government control and permitted to issue mortgage securities guaranteed by the Treasury until private sector competitors emerge. The GSE’s investment portfolios, which have fallen to less than $250 billion each from over $900 billion each at their peak, could be liquidated under the Senate plan.

“We’re looking for a more simplified approach that protects the taxpayer, preserves the 30-year fixed mortgage and includes stronger access and affordability provisions,” Mr. Warner said in a statement Friday.

However, Bloomberg’s sources acknowledge that a private sector alternative to Fannie and Freddie will not only take years to emerge, but it’s not clear which companies will enter the market. Besides having the advantage of bi-partisanship, the proposals have the advantage that politicians who wish to reform mortgage finance are reaching retirement age as Bloomberg notes.

Another factor bolstering chances for a deal is the retirement of Washington officials interested in reducing government control of housing, including Mr. Corker. The Tennessee senator has been working with Mr. Warner and Senate Banking Committee Chairman Mike Crapo (R., Idaho) all year on the issue, according to people familiar with the deliberations, and Mr. Crapo has made the overhaul a top goal for his panel.

Even House Financial Services Committee Chairman Jeb Hensarling (R., Texas) signaled this month in a speech to Realtors that he would like to see a Fannie and Freddie deal in what is to be his final year in Congress. Mr. Hensarling said he is still committed to replacing the companies, but has backed off a position that any future setup provide no federal backstop.

Reforming mortgage finance has not been a focus for the Trump administration and nor has it endorsed any proposed legislation thus far. However, Treasury officials are reported to have been in close contact with the Senate officials as the plan has emerged. Furthermore, Treasury Secretary Steven Mnuchin, who also headed up Goldman’s mortgage securities department in the late 1990s, disagreed with calls for abolishing Fannie and Freddie last month.

“No, I wouldn’t,” he said in an interview at November’s Wall Street Journal CEO Council meeting. “We have got to make sure that the housing system is built to last.”

Bloomberg reports that supporters of Corker and Warner’s proposal see a “narrow window” in early 2018 when the legislation could be added on to another bill to reduce post-crisis regulations in the financial sector.

The question about what to do with Fannie and Freddie has now come full circle since the financial crisis. In its aftermath, the consensus view became so negative that even long-time supporters, like Democrat Barney Frank, capitulated, saying they should be abolished. In 2013, Obama called on Congress to wind them down and “end Fannie and Freddie as we know them”. However, the tide started to turn shortly after due to the lack of confidence in mortgage bonds that didn’t have a government guarantee. The latest Senate proposal is the first having bipartisan backing which keeps Fannie and Freddie instead of replacing them.

So, a bit like the “Too Big To Fail” banks, the encroachment of government into parts of the financial system which it should never have entered, makes winding back that intervention difficult, if not impossible. We could have seen it coming as Bloomberg laments.

Washington’s about-face will come as little surprise to market participants who for years predicted that efforts to replace Fannie and Freddie, which together back around half of all outstanding mortgages, would prove too difficult. But the shift on Capitol Hill nevertheless illustrates one way in which policy ideologues appear to have lost ground to market realities.