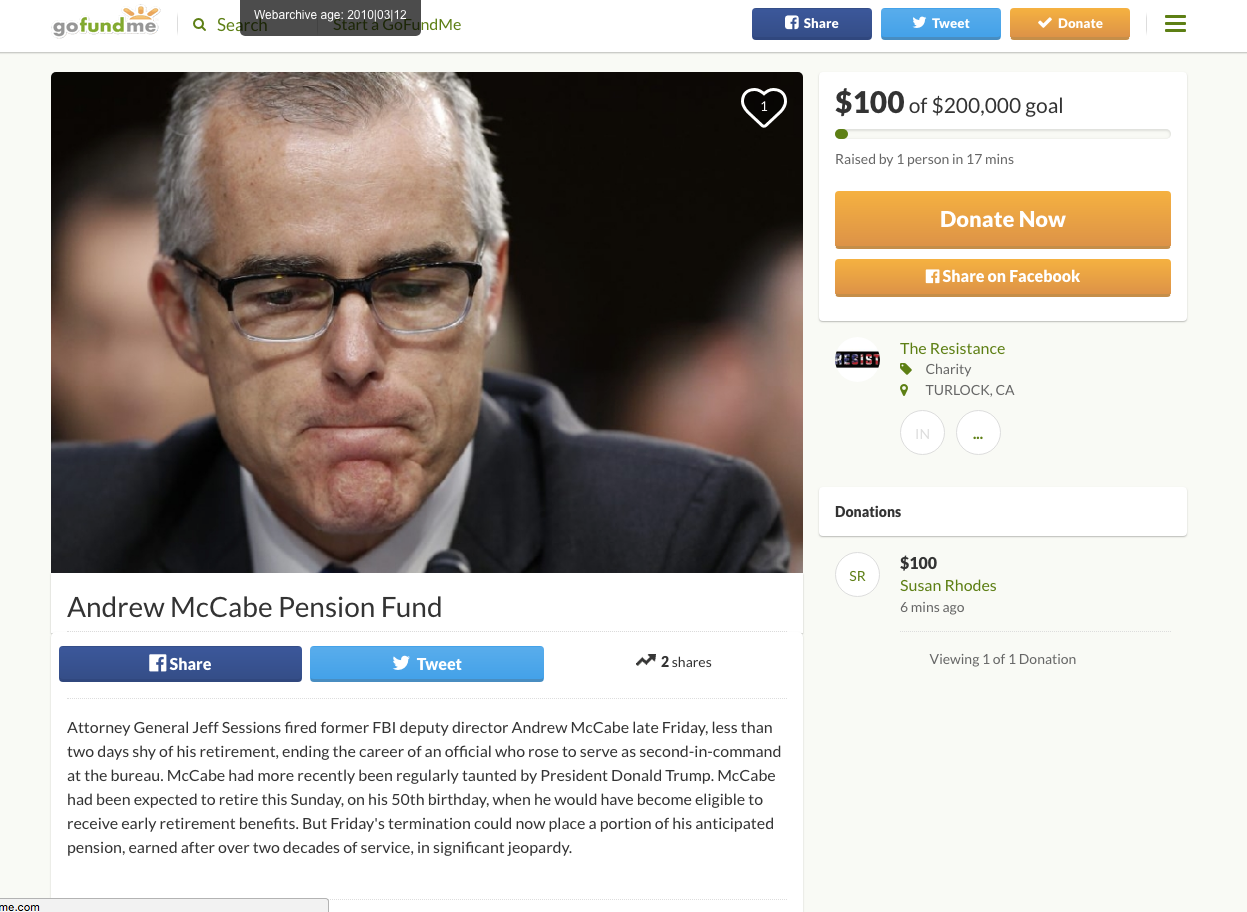 Despite being fired for lying under oath and leaking to the press in a manner that “lacked candor,” former FBI Deputy Director Andrew McCabe has received an outpouring of support from the left. In addition to Rep. Mark Pocan (D-WI) offering him a temporary job so he can receive his full retirement benefits, dozens of people have set up GoFundMe accounts, which have already raised tens of thousands of dollars.

Some have expressed surprise that the same people who have long railed against “the man” are so overwrought that an FBI Official – who was found corrupt in an IG investigation demanded by Democrats that and that was directed by an Obama IG appointee – was fired by an administration they don’t like, that they’ve put the closest thing to “Agent Smith” on a pedestal and are now giving him money.

So far 39 GoFundMe donation campaigns have been set up for the former Deputy Director who’s now left with a reduced pension.

Chicago resident “Ethan,” for example, who describes himself as a “volunteer” set up a campaign for $75,000 despite not knowing much about McCabe’s pension.

“If President Trump and AG Sessions fire Andrew McCabe before he retires, it will be an insult to every civil servant in the country,” Ethan writes. “I have no idea if this is even close to what Mr. McCabe’s pension would be, but we need to start somewhere and show our support!”

Meanwhile, McCabe isn’t “losing his pension.” While the Friday termination will impact him financially to some degree, the most significant impact is that he doesn’t get to start taking it for another seven years, and he will likely lose his lifetime medical benefits for he and his wife.

Considering McCabe’s number of years at the agency and estimations of his high-level pay grade, formulas published by the US Office of Personnel Management for law enforcement officers show that his yearly payout could hit in the area of $60,000 each year, if McCabe were to retire after his birthday on Sunday.

If he were to be fired before Sunday, it appears likely McCabe could be docked his pension until he hits another, later age milestone.

Experts disagree — and caution that predicting payouts is complicated given the complex federal system and each individual’s personal career particularities — but, per federal rules, McCabe may not be able to draw an annuity until a date ranging just shy of his 57th birthday, and as late as his 62nd. That could put the value of his uncollected pension in the realm of a half-million dollars. -CNN

Furthermore, McCabe can earn his full pension if he’s employed in any federal position for just another day or so.

Related Topics:Andrew McCabeFBIFeaturedgofundmeMcCabe
Up Next

Attorney For McCabe Used To Be In Favor Of The O.I.G. Probe Until It Turned On His Client