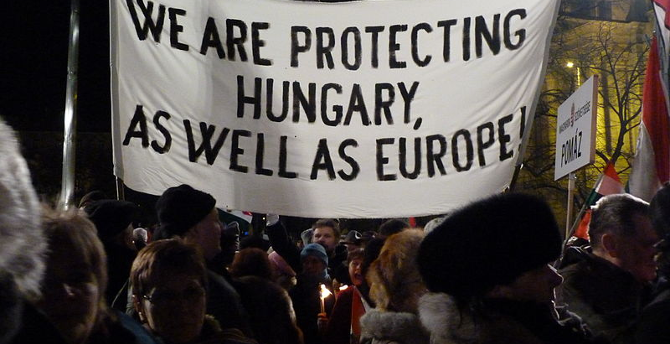 Hungarian lawmakers previewed a proposed legislation package aimed at stemming the flood of mass illegal migrants through “every means possible,” including those who are aided by foreign funded NGOs such as the various organizations tied to billionaire George Soros.

The legislative package presented during a Wednesday cabinet meeting has been referred to as the “Stop Soros Act” by government spokesman Zoltan Kovacs, in reference to the 87-year-old US-Hungarian financier who has been in a long-standing fallout with Hungarian Prime Minister Viktor Orbán.

“If Soros is found to have engaged in such activity, meaning he organizes illegal immigration, then the rules will apply to him,” Kovacs said.

While the exact details will be presented on Thursday, Hungarian media detailed three primary pillars of the new legislation outlined by Interior Minister Sándor Pintér (translated):

NGOs which participate in or support illegal immigration will be obligated to provide data to the government on their activities.
Affected NGOs that receive money from abroad must pay a 25% tax, collected by the National Tax and Customs administration.
Foreign nationals and Hungarian activists who support mass illegal migration may be subject to a restraining order which requires they remain up to 5 miles from the border, with diplomats and UN representatives exempt.
Observance of these rules, Pintér said, will be checked by the prosecutor’s office, and if it finds an infringement, it will inform the court and propose a sanction on which the court may decide. -origo.hu (translated)

The legislation follows an October, 2017 probe into Soros’ “Open Society” network, in which Orbán instructed his intelligence services to map what he described as the networks run by the billionaire financier’s “empire” targeting his country, reported Bloomberg. Orbán also mailed a Soros-related questionnaire to all 8 million Hungarian voters (see: Hungary Launches Anti-Soros Political Campaign).

As an illustration of the types of assistance provided by Soros NGO’s during a Wednesday press conference, Interior Minister Pintér gave the example of someone giving a mobile phone to an illegal migrant “with the aim of showing how to get to, say Sweden.”

As we noted in December, three decades ago, Soros paid for a young Viktor Orbán to study in Britain. And as recently as 2010, Soros donated $1 million to Orbán’s government to help the cleanup effort following the infamous “red sludge” disaster.

But the once-warm relationship between the two men has deteriorated substantially over the past seven years, as Orbán has drifted further to the right. In 2014, the leader of Hungary’s Fidesz party declared he would seek to model Hungary’s government after “illiberal” democracies like the government of Russian President Vladimir Putin.

Of late, Orbán has accused the “open border” tycoon and philanthropist of trying to undermine European values and cultural identities by actively promoting and assisting a flood of refugees and asylum seekers from largely Muslim countries.

In 2015, Soros stated that the European Union “has to accept at least a million asylum-seekers annually for the foreseeable future. And, to do that, it must share the burden fairly.”

In December, Soros was accused by Orbán of planning to interfere with Hungary’s upcoming April, 2018 election by distributing pro-immigration propaganda via Soros-linked NGOs.

Hungary is far from alone in its desire to preserve its borders, language and culture: Poland has joined Hungary’s anti-immigration stance, drawing rebuke and threats from the European Union, of which it is a member. At an early January press conference in Budapest, Viktor Orbán and Polish Prime Minister Mateusz Morawiecki told reporters “The EU’s migration policy… has failed,” adding “It is clear that the European people don’t want immigration, while several European leaders are still forcing the failed immigration policy.”

“In terms of migration and quotas that were to be imposed on (EU) member countries we strongly reject such an approach as it infringes on sovereign decisions of member states,” Morawiecki said.

Meanwhile, last year in Austria, a 31-year-old anti-immigration candidate led his party to victory in Parliamentary elections. In the Czech Republic, a populist tycoon named Andrej Babis who’s been described as the “Czech Donald Trump.” Babis led his party to a landslide victory, making him the frontrunner to become the republic’s next prime minister. Italy’s two richest regions overwhelmingly voted for autonomy over the weekend, and so on.

That said, with his unlimited financial resources, Soros is more than capable of striking back against Orbán. The billionaire financier donated $18 billion in assets from his family office to his “Open Society” foundation, which oversees a network of dozens of nonprofits that seek to promote Soros’s political values. Incidentally, the final showdown – financial or otherwise – may be not between Soros and Orban but Soros and Putin whose wealth, according to some estimates as much as $200 billion, is orders of magnitude higher than that of Soros.

In November, Soros responded to Orbán, posting a scathing rebuttal to his website for an “anti-Soros, anti-Muslim, anti-Semitic propaganda effort.”

With Hungary’s health care and education systems in distress and corruption rife, the current government has sought to create an outside enemy to distract citizens. The government selected George Soros for this purpose, launching a massive anti-Soros media campaign costing tens of millions of euros in taxpayer money, stoking anti-Muslim sentiment, and employing anti-Semitic tropes reminiscent of the 1930s. The national consultation is part of an ongoing propaganda effort that has been underway since May 2015 that included the “Stop Brussels” consultation in the spring of 2017 and the referendum that vilified migrants and refugees in 2016.

Soros went on to offer a “rebuttal”, which in several cases read more like a confirmation of Orban’s “propaganda.”