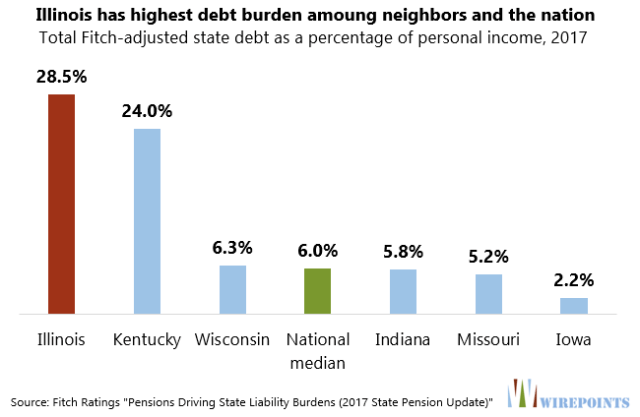 Illinois has been losing population for four years. The state’s out-migration crisis is so bad that Illinois has dropped from the fifth-largest to the sixth-largest state, falling behind Pennsylvania. Since 2010, the Land of Lincoln lost a whopping 640,000 people on net to out-migration. The state is shrinking so rapidly that it’s at risk of losing a House seat.

Illinois’s people problem is nothing to shrug off, because it indicates the state economy is on pace to continue its decline. And if nothing changes, people will just keep leaving.

So what’s wrong with Illinois?

Illinois ranks near the bottom in terms of economic freedom compared with the rest of the country, according to the Fraser Institute’s recent Economic Freedom of North America, or EFNA, report, released in partnership with the Illinois Policy Institute. This report ranks states based on an index of 10 variables related to government spending, taxes and labor market freedom. Only 12 states were ranked lower. Unsurprisingly, blue states California and New York ranked at the bottom of the economic freedom list.

Pennsylvania, which just overtook Illinois as the fifth-largest state in the U.S., ranks 18th on the index of economic freedom, compared with Illinois’ 35th place ranking.

While Illinois continues to shrink, states that rank near the top of the Fraser Institute’s economic freedom rankings are growing. Since the last recession ended in 2009, population in the 10 most-free states has grown 2.5 times faster than it has in the 10 least-free states. Employment and income have also grown faster in the freer states.

So why are economically free states growing while states such as Illinois are losing residents? One reason is that high levels of taxes, spending and regulation make it harder for entrepreneurs to succeed. When businesses can’t expand and hire new workers, it hurts everyone. Illinois’ lack of opportunity pushed nearly 100,000 people to drop out of the workforce in 2017 alone.

States that have seen the fastest economic growth, such as Texas and Florida, tend to have a common focus in their economic policies: low taxes (including low or no income taxes), a fiscally responsible approach to spending and a common-sense approach to regulation that makes it easier for entrepreneurs to be successful.

Starbucks Plans To Spend $250 Million On Benefits For Employees