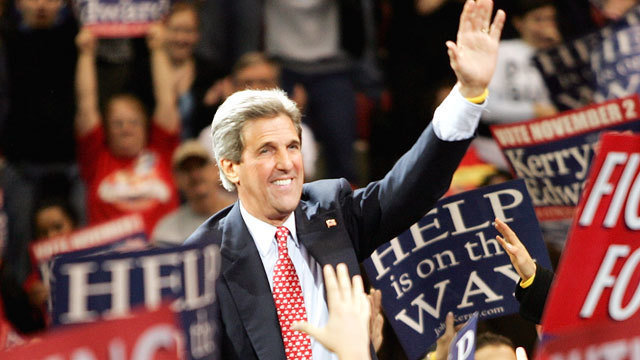 
Former senator, secretary of state, and failed presidential candidate John Kerry wants another go at America’s top office, according to an Israeli newspaper.


Kerry reportedly told Palestinian leaders — and a close, personal friend of Palestinian Authority President Mahmoud Abbas — that they should “hold on” and “be strong,” because he was planning to challenge President Donald Trump in the 2020 elections.


“Hold on and be strong,” Kerry said, according to media. Adding that “that [Abbas] should stay strong in his spirit and play for time, that he will not break and will not yield to President Trump’s demands.” He reportedly added that he did not believe Trump would be in office in a year and “hinted” that there may be forthcoming challenges to Trump’s authority.


Kerry also, according to JPost, gave the Palestinians some advice on how to negotiate with Trump, suggesting that they clarify their “peace principles” and define a list of demands to present to potential negotiators.


To close, JPost says, Kerry “surprised” his hosts by revealing that he was “seriously considering” running for the Democratic nomination in 2020. He even deflected questions about his advanced age come the mid-year contest (Kerry is several years older than Donald Trump).


If it is indeed true that John Kerry has not completely exhausted his presidential ambitions, he has quite the mountain of issues to overcome. Kerry is the only Democratic presidential candidate in recent memory to lose the popular vote, and his repeat appearance in the primaries will give other Democratic nominees the chance to consider precisely what the world would look like had John Kerry defeated George W. Bush — and it probably isn’t a good look for Kerry.


In the meantime since losing to Bush, he’s also negotiated a disastrous nuclear deal with the Iranian Mullahs and clearly taken sides against one of the United States’s most important allies, Israel. So that should also definitely work out in his favor.


But, in truth, a potential Kerry presidential campaign may not be about Kerry at all. The Obama Administration has had a shockingly difficult time letting go of power, and the team behind former President Barack Obama seems desperate to regain its influence — so desperate they may be willing to field nearly anyone, including John Kerry, just to return, somehow, to the White House.