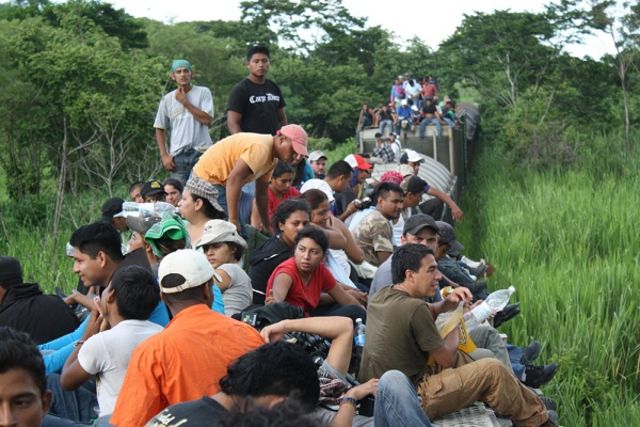 Almost two months after President Donald Trump revealed that the US would end immigration protections for 45,000 Haitian refugees who’ve been living in the states since the devastating 2010 earthquake that rocked the Haitian side of the island of Hispaniola.

The decision was reportedly made to appease immigration hard-liners who insist the program was never intended to grant permanent residency to Haitians who were displaced by the quake.

And in a stunning follow-up to that decision, the New York Times reported Monday that the administration plans to end protections for 200,000 people from El Salvador who’ve lived in the US for more than a decade.

The Times described the decision as “one of the most consequential to date” concerning Trump’s approach to tightening restrictions on legal immigration while simultaneously cracking down on illegal immigration. Since he’s taken office, there’s been a notable drop in the number of illegal border crossings.

Salvadorans are the largest group of foreigners benefiting from the temporary protected status. Back in September, Trump ended protections for 800,000 undocumented immigrants who were brought to the US as children – the so-called DREAMers.

The officials, who declined to be identified because they were speaking before an official announcement on the decision later Monday morning, said that the administration was ending a humanitarian program, known as Temporary Protected Status, for Salvadorans who have been allowed to live and work legally in the United States since a pair of devastating earthquakes struck their country in 2001.

Salvadorans were by far the largest group of foreigners benefiting from temporary protected status, which shielded them from deportation if they had arrived in the United States illegally. The decision came just weeks after more than 45,000 Haitians, the second largest group, lost protections granted after Haiti’s 2010 earthquake, and it suggested that others in the program, namely Hondurans, may soon lose them as well. Nicaraguans lost their protections last year.

The administration is arguing that the Temporary Protected Status program had turned into a quasi-permanent benefit for hundreds of thousands of foreign residents who relied on it. Trump’s decision to end the protections has alarmed the El Salvadoran community, and companies in California and Texas that employ large populations of the El Salvadoran migrants affected by the decision.

TPS was signed into law in 1990 by President George Bush. It granted protected status to individuals from a given country regardless of whether they entered the US legally or illegally. The protections typically extend to countries experiencing a natural disaster, armed conflict or other strife.

In the days leading up to the decision, immigrant advocates and the El Salvadoran government pleaded for the United States to extend the program, as it has several times since 2001, saying that conditions in El Salvador were still dire. A sense of dread gripped Salvadorans and their employers in California, Texas, Virginia and elsewhere.

“We had hoped that if we worked hard, paid our taxes and didn’t get in trouble we would be allowed to stay,” said Veronica Lagunas, 39, a Salvadoran who works overnight cleaning offices in Los Angeles, has two children born in the United States and owns a mobile home.

There is no limit to the number of extensions a country can receive. Countries that have received, and then lost, the designation in the past include Bosnia and Herzegovina, which was famously the setting for a bloody civil war in the 1990s. Guinea, Sierra Leone and Liberia were granted protected status during the latest Ebola outbreaks.

El Salvador was one of the first countries affected by the program because of a vicious civil war that raged from 1979 until 1992.

Many people affected by the order will likely remain in the US illegally, since their entire lives and livelihoods are based here. Though some will likely lose jobs for lack of work permits.

Ms. Lagunas said that she would remain in the United States illegally, risking arrest and deportation. But she would lose her job of 12 years without the work permit that comes wit the protection. Her family would lose medical insurance and other benefits.

“There is nothing to go back to in El Salvador,” she said, speaking in Spanish. “The infrastructure may be better now, but the country is in no condition to receive us.”

With his protected status, Carlos Jiron, another Salvadoran, started a small contracting business and won bids for big jobs, including to paint federal buildings in the Washington area.

“We have built a life here, said Mr. Jiron, 41, who lives with his wife and two American-born children in a four-bedroom house they bought in Springfield, Va.

He will have to decide whether to take his children to El Salvador, where he says they would not maximize their potential and would face safety threats; leave them with guardians in the United States;; or remain in the country at the risk of arrest and deportation as one of the millions of undocumented immigrants.

His 14-year-old daughter, Tania, a fan of Disney movies and hip-hop music, said she could not fathom starting over in El Salvador. “This is where I was born and am supposed to be raised,” she said.

Temporary protections for El Salvadorans were also granted in March 2001 after two earthquakes in January and February of that year killed more than 1,000 people and destroyed hundreds of thousands of homes. Over the next 15 years, the George W. Bush and Obama administrations extended the protections several times. In 2016 – the last time the protections were extended – the El Salvadoran government cited factors ranging from drought to poverty to violence.

San Salvador, the country’s capital, is considered one of the most dangerous cities on Earth. Its reputation for violence has hampered foreign investment. But the Trump administration says the only factor that should be considered when deciding on an extension should be the initial reason for granting the protections: In this case, whether the damage from the two earthquakes has been repaired.

The Department of Homeland Security has decided that, 17 years later, enough of the damage has been fixed, and that the El Salvadorans should rightfully return home.

To be sure, some members of Congress are pushing to enshrine these protections in law – much like Democrats are now trying to do for dreamers. Others are asking the federal government to grant these protections to Venezuelans fleeing an economic collapse in their country. The US Chamber of Commerce has also urged the administration not to abandon the protections.

According to the NYT, removing the protections would result in a labor shortage in the Houston area as it struggles to rebuild following Hurricane Harvey.

But the administration appears unwilling to budge, with Trump viewing his crackdown on immigration as an issue that’s important to his base – making it a nonnegotiable component of his political platform.