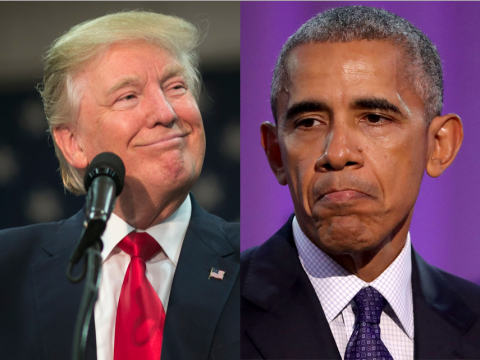 President Trump, tweeting from his holiday retreat at Mar-a-Lago, predicted Tuesday that the newly passed tax bill’s repeal of ObamaCare’s individual mandate will unravel the 2010 law in its entirety and spur a bipartisan health overhaul.

“Based on the fact that the very unfair and unpopular Individual Mandate has been terminated as part of our Tax Cut Bill, which essentially Repeals (over time) ObamaCare, the Democrats & Republicans will eventually come together and develop a great new HealthCare plan!” Trump tweeted.

The repeal of the Affordable Care Act’s requirement to buy health insurance was a big win for Republicans who had struggled to take on ObamaCare earlier this year. The measure strikes a major blow to former President Barack Obama’s signature health law.

What comes next, however, is unclear. While Trump has described the mandate repeal as tantamount to the repeal of the entire law, other parts of the ACA remain in place.

But the individual mandate is considered the linchpin of the program, meant to ensure young and healthy customers are buying into the system, to offset the cost of taking on more sick and elderly customers.

Without the mandate, millions could drop out of the insurance pool since they no longer face a penalty for noncompliance.

This could mean more premium pain for those still in the system, for now. Average premiums are estimated to increase by 10 percent – a prediction Democrats are quick to cite in blasting the repeal’s inclusion in the tax bill.

Premiums, though, were rising before the mandate provision passed.

The big question now will be whether the insurance markets can adjust, or whether the fallout is so significant that it spurs Congress to hammer out a more comprehensive health care overhaul.