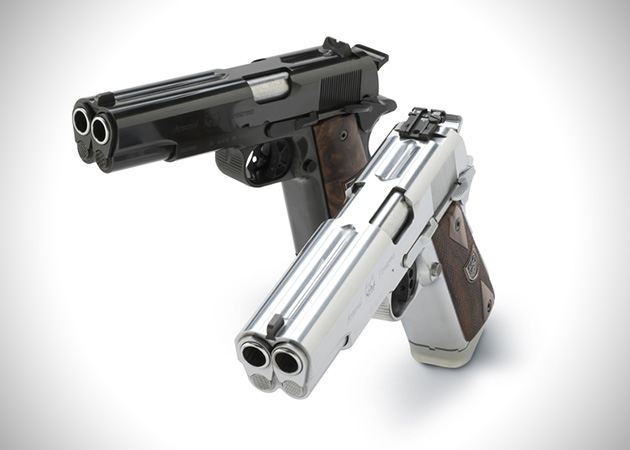 In a development that echoes the infamous “Fast and Furious” scandal – which exposed that the ATF had allowed dangerous criminals to hang on to firearms that were supposed to be recovered in sting operations – the Associated Press has discovered another similar example of law-enforcement malfeasance.

As we highlighted back in April, Holder was held in contempt of Congress after resisting the release of documents outlining the agency’s role in the scandal. Unsurprisingly, the DOJ decided not to prosecute itself, and Holder got off scot-free.

This time around, the AP has discovered – following a lengthy investigation – that more than a dozen firearms sold by law enforcement agencies in Washington State since 2010 later became evidence in new criminal investigations. While federal agencies weren’t involved, the AP report exposes the carelessness exhibited by Washington State Police and many local departments throughout the state.

Using those records, the AP created a database of almost 6,000 firearms sold by law enforcement since 2010. The Bureau of Alcohol, Tobacco, Firearms and Explosives declined to release tracking information on guns associated with crimes, so the AP collected that information from individual agencies and compared it with its own database to find firearms with matching make, model, caliber and serial numbers.

In its report, the AP discusses in great detail how these weapons were used by criminals to violently victimize innocent bystanders. Homicides and armed robberies are disturbingly common. In one incident, police arrested a convicted felon who was barred from owning guns. He was found to be in possession of a firearm that had been traded to an arms dealer by Washington State Police. Suicide and threats of lethal force were also unjustifiably common.

Here’s a complete breakdown of the various crimes committed by people in possession of these weapons, courtesy of the AP.

The Pierce County Sheriff’s Office in April 2014 sold a list of guns at auction that included a Mossberg 12-gauge shotgun. In October 2016, Jaylen Bolar sent text messages to his mother, threatening to kill her and others. Angela Almo contacted a behavioral health center instead of the police because she knew her son had firearms, including a Mossberg 12-gauge shotgun and she feared he’d be killed in a standoff with authorities.

When the Tacoma police became involved, he denied it, but his aunt confirmed that she, too, had received threats. Robin Olson showed an officer her phone, which contained a message from Bolar asking his uncle to kill him because he was tired of living.

Bolar also threatened to kill a woman who used to be his boss. He was taken into custody, and a search of his home found two firearms in his bedroom. One was the Mossberg shotgun sold by the sheriff’s office.

The Kitsap County Sheriff’s Office sold a Hi Point 9mm pistol in March 2014. In October 2015, the Snohomish County Sheriff’s Office responded to a 911 call from a woman who said she heard what she thought was a gunshot and went outside to find her daughter’s intoxicated boyfriend passed out on the front porch. When deputies arrived, they found a handgun, the Hi Point 9 mm pistol, on the ground next to the man. It was the gun sold by the Kitsap sheriff’s office. A search found that the man was a convicted felon who wasn’t permitted to have a gun. The deputy put the man in handcuffs and called for medical help.

PROHIBITED FROM HAVING GUN

The Washington State Patrol traded a Lorcin L380 semi-automatic pistol with a firearms dealer in June 2010. In May 2015, the Kent Police Department was investigating a 911 call and encountered four people outside the house. One of the men was prohibited from having a gun, but they found he was carrying a handgun, the Lorcin L380 semi-automatic pistol sold by the State Patrol. The gun had been reported stolen, and he was arrested.

The Aberdeen Police Department traded a JC Higgins .22-caliber rifle with a firearms dealer in February 2011. In April 2015, the Yakima Police Department responded to a domestic violence assault involving a JC Higgins .22-caliber rifle with the same serial number. The dispute involved an elderly man who had handled his wife roughly and threatened her sister. The man was charged, and police took his firearm. In October 2015, Kent police searched a suspected drug house and arrested several people wanted on felony warrants. They found a .22 caliber rifle — the JC Higgins rifle sold by the Aberdeen police.

The Thurston County Narcotics Task Force sold a Smith & Wesson pistol in August 2012. In October 2013, the Tacoma Police went to the University of Washington, Tacoma to investigate a report of a student who was posting photos of a gun on Facebook and said he had “vivid, colorful dreams of shooting and killing lots of people last night.” Police found in his backpack a Smith and Wesson pistol, the one sold by the narcotics task force.

The Bonney Lake Police Department in March 2011 traded a Davis Industries .380-caliber handgun with a firearms dealer who sold it to the public. In February 2012, Kent police stopped a man for an expired registration and discovered baggies of cocaine in his car. He said they were party favors. They also found his concealed handgun, the firearm sold by the police.

Longview Police Department sold a Davis Industries .22 caliber pistol in August 2016. The Thurston County Sheriff’s Office responded to a 911 call in April 2017 from a man who said his father headed to a house with a gun and planned to threaten the occupants. Jesse Brown threatened to kill the men who lived there and was arrested. Officers confiscated his Davis Industries .22 caliber pistol — the one sold by Longview police — and 15 other firearms.

The Thurston County Sheriff’s Office sold a Mossberg, Model 590, 12-gauge shotgun in December 2014. In March 2016, the Tacoma police responded to a call by a 12-year-old girl who said she and her sister fled their home because their father was drunk and was threatening to shoot his girlfriend and threatening to beat up one of the girls because he couldn’t find his gun. The police later found a Mossberg, Model 590, 12-gauge shotgun — the gun sold by the Sheriff’s Office — in the bathtub.

The Washington State Patrol traded a batch of guns to a firearms vendor in June 2010 that included a Smith and Wesson .9mm handgun. In September 2014, the Yakima Police Department responded to a report of a suicidal man with a gun. They arrived to find 24-year-old Kyle Juhl with a gunshot wound to the head. He used a Smith and Wesson .9mm handgun, the one sold by the State Patrol.

The Thurston County Narcotics Task Force sold a Springfield Armory .40-caliber pistol in December 2013. In February 2014, the Seattle Police Department helped take firearms from a man who was having a mental health emergency and was at the Involuntary Treatment Act court. One of the guns was the Springfield Armory .40-caliber pistol sold by the task force.
EN

Almost nothing was said in the report about how law enforcement agencies in Washington justified their use of the program. According to US News and World Report, Washington is the 37th safest state in the US, a surprisingly weak performance, though data provided by the FBI show the rate of violent crime has been steadily declining in Washington. Indeed, across the US, violent crimes are becoming less common.

Meanwhile, as we noted last year, gun sales – measured by the number of FBI background checks on would-be gun owners that had been conducted during that period – have continued to climb despite the election of the first NRA-endorsed president in nearly a decade.

But that doesn’t excuse the notion that law enforcement agencies handed out powerful weapons to dangerous individuals with little, or no, oversight.

We now wait and see how – and, indeed, if – the Department of Justice will react to this report.