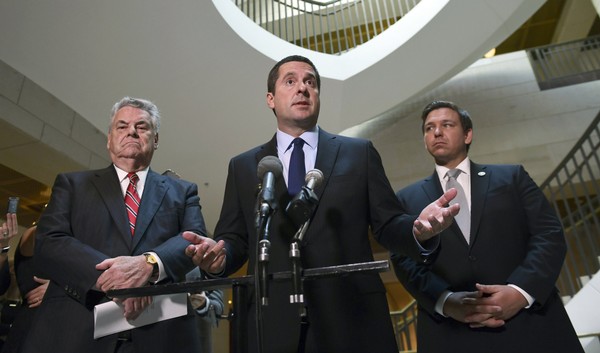 The GOP’s feud with the FBI is escalating to absurd new heights, Politico reported.


As Special Counsel Robert Mueller pivots his investigation to focus on whether President Donald Trump committed obstruction of justice after finding no “there” there during his probe into possible collusion between the Trump campaign and Russia, the GOP is pushing back against political bias in the FBI, triggering outrage among Congressional Democrats.


Meanwhile, Rep. Bob Goodlatte, chairman of the House Judiciary Committee, accused FBI agents of engaging in a “conspiracy” to support Clinton and damage Trump, hinting that some of this behavior could’ve itself been criminal. Goodlatte took aim at a text messages between FBI Special Agent Peter Strzok and and FBI lawyer Lisa Page, with whom he was having an affair.

Not all of the text messages have been released, but they are slowly being turned over the Congress in batches. Though the bureau recently confessed that it had lost 50,000 messages sent between the two FBI employees during a five-month period in 2016. The FBI has blamed the erasure on Samsung. The DOJ has launched a probe into the missing messages, but some Republicans, including House Freedom Caucus chief Mark Meadows, have revived calls for a second special counsel to investigate the FBI.


“Some of these texts are very disturbing,” Goodlatte said, adding, “they illustrate a conspiracy on the part of some people, and we want to know a lot more about that.”


As we reported earlier today, some of the texts that have been turned over suggested that in the “immediate aftermath” of the election, a “secret society of folks” within the DOJ and FBI came together to try to undermine President Trump.


But views on the FBI’s purported misconduct, unsurprisingly, diverge along partisan lines, as the Hill points out. Democrats have painted investigations of the FBI’s conduct by the Senate Homeland Security and Governmental Affairs Committee and the House Intelligence, Oversight and Government Reform, and Judiciary committees as efforts to discredit Mueller and the Department of Justice.


Democrats and the FBI have joined together in criticizing Congressional Republicans, who have so far refused to release a memo detailing what some Congressmen have described as a coordinated effort by the Obama administration to monitor members of the Trump campaign. Some conservatives have also joined in the chorus of people demanding the memo be released. But the lawmakers have so far denied a copy to everybody who’s asked – including the FBI.


Republican Trey Gowdy, chairman of the House Oversight and Government reform committee, said this refusal is justified because the memo’s contents were gleaned from documents turned over by the FBI, according to Fox News.


“To say we want to see your memo when for months and months they haven’t let us see lots of stuff we wanted to see — the memo came from what you gave us, FBI,” Gowdy told Fox News. “There is nothing new in there other than what you gave us and you showed us.”


For what it’s worth, some Republicans are still willing to give the bureau the benefit of the doubt, particularly regarding the lost text messages.


“I’m not going to read anything into it other than it may be a technical glitch at the bureau,” Senate Intel Committee Chairman Richard Burr told the Hill. “The fact that they have provided the rest of them certainly doesn’t show an intent to try to withhold anything.”

The pressure on the FBI has made even Trump allies nervous. Last night, Axios reported that Christopher Wray, Trump’s pick to lead the bureau, threatened to resign amid pressure from Trump and Sessions to fire Andrew McCabe, deputy director of the bureau and a close Clinton ally whose wife received money from the Clinton machine during a recent campaign for office.


After spending hours of closed-door Congressional testimony last month, McCabe announced that he would resign early this year.


But regardless of what Congress does – or how much questionable behavior their investigations into the FBI uncover – without a special counsel, Mueller will continue to have the upper hand. After all, Mueller has the power to call a grand jury, which can approve indictments – evidenced by the charges he’s brought against at least four former Trump campaign officials. While it has subpoena power, Congress can’t arrest anybody…


…So without a special counsel, Republicans’ options for holding the bureau accountable remain limited…