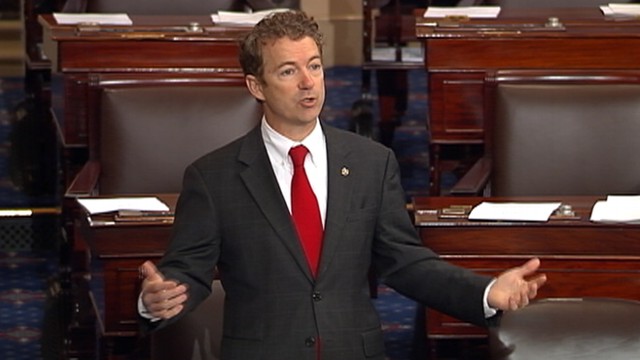 The Hill reports Rand Paul Threatens to Filibuster Long-Term Surveillance Extension.
The House Rules Committee on Tuesday released a draft bill that would reauthorize the program. Privacy-minded lawmakers have already criticized the bill as doing little to reform 702.

“This bill is an eleventh-hour attempt to sneak an unchecked warrantless surveillance program through Congress,” Sen. Ron Wyden (D-Ore.) said in a statement Wednesday morning.

“The legislation posted late yesterday is a clear step backward for Americans’ rights. It does nothing to check the warrantless backdoor searches of Americans’ communications,” Wyden added.

“The bill also fails to codify the current prohibition on ‘abouts’ collection, in which communications entirely among innocent Americans can be swept up if they reference a target’s email address.”

There have been rumblings on Capitol Hill that lawmakers could try to include language in must-pass spending legislation to extend the controversial program. On Tuesday, Paul and Sen. Mike Lee (R-Utah) said they would oppose any spending bill that included a permanent reauthorization of the provision, according to the Washington Examiner.