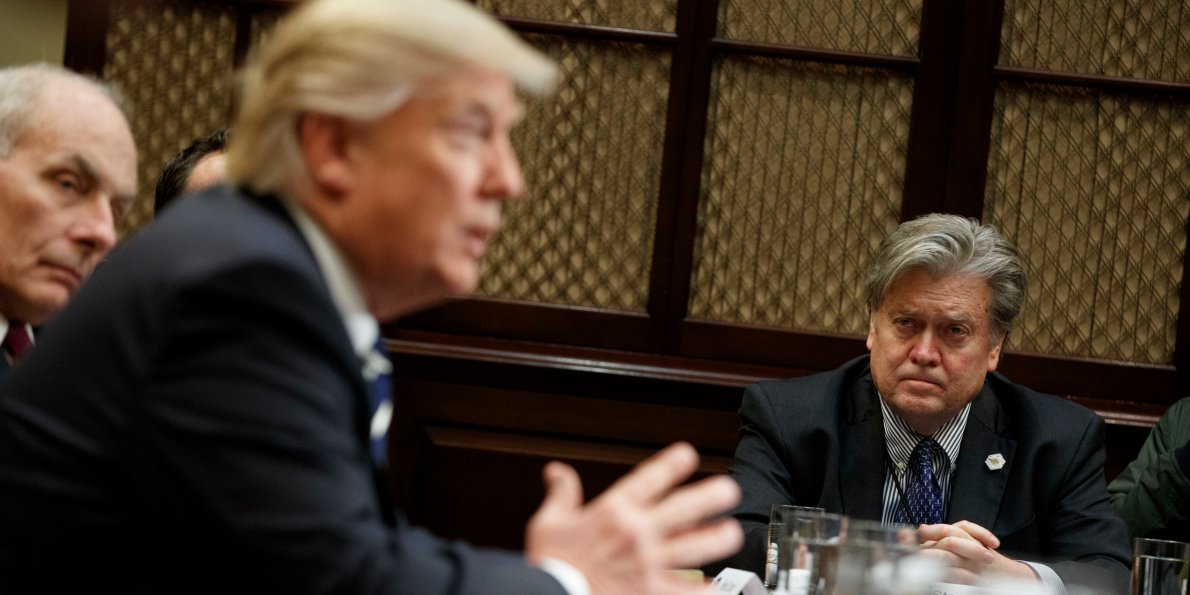 Update: CNN reports that Bannon has struck a deal with Mueller to avoid grand jury testimony and instead meet with Special Counsel Robert Mueller and his team for an interview. Furthermore, Bannon will answer questions about his stint in the White House because executive privilege would not apply, he said.

Tuesday was a difficult day for former White House Strategist Steve Bannon, who has seen his political influence and reputation as a “kingmaker” evaporate since the first excerpts of Michael Wolff’s book “Fire and Fury” were published earlier this year.

Bannon endured 10 hours of testimony before the House Intelligence Committee on Tuesday while refusing to answer any questions about his time in the White House or the transition, per the White House’s orders. The New York Times also reported that he had been served with a subpoena last week to testify before the grand jury in special counsel Robert Mueller’s probe into Russian collusion after refusing the offer of an informal interview.

Today, NBC News has reported some new details about Bannon’s legal situation that underscore the difficult situation the former Breitbart executive, who was ousted by the Mercer family as his political allies chafed at some of his more self-aggrandizing comments.

Bannon’s subpoena, as it turns out, was hand-delivered by FBI agents who showed up at his home last week to deliver the subpoena and discuss the Russia probe with Bannon. However, the agents were unaware that Bannon had retained counsel just hours before their visit, and subsequently redirected the subpoena to Bannon’s lawyer…

FBI agents showed up at Steve Bannon’s Washington home last week intent on serving him with a subpoena to appear before a grand jury investigating possible ties between President Donald Trump’s campaign and Russia, according to a source familiar with the proceedings.

The agents were unaware at the time that Bannon had retained Washington lawyer William Burck just hours earlier, according to two people familiar with the events that took place on Jan. 9. Once redirected, the agents sent the order to Burck, who is also representing two other witnesses in the probe being led by special counsel Robert Mueller, a former director of the FBI.

Bannon, who served as President Donald Trump’s chief strategist until he departed the White House in August, could end up being interviewed by Mueller’s team before the end of the month, according to one source who agreed to discuss the matter on the condition of anonymity.

Rep. Mike Conway, R-Texas, who leads the House Intelligence Committee, said the committee’s subpoena remains in effect and described the interview as in “recess.” It was not clear whether Bannon would appear again before the committee, though Rep. Eric Swalwall, D-Calif., indicated late Tuesday that he was hopeful Bannon would return Thursday.

It’s believed the Mueller subpoenaed Bannon to thwart any attempt by the White House to silence him. Bannon reportedly told Wolff that Trump probably did meet Russian lawyer Natalia Veselnitskaya when she visited the White House in June 2016 for a meeting with Donald Trump Jr., Paul Manafort and Jared Kushner. Trump has previously denied knowing anything about the meeting.

The subpoena compels Bannon to testify before a grand jury, skipping the voluntary interview with Mueller’s team that many in Trump’s orbit have elected to take. But Mueller may still leave open the option for an interview in lieu of grand jury testimony. Bannon is likely to accept such an option if it is made available, according to a source close to Bannon.

Three people familiar with the special counsel’s investigation suggested Mueller moved to subpoena Bannon, rather than ask him to voluntarily appear for questioning, in order to thwart any potential attempt by the White House to pressure Bannon into refusing to cooperate.

Bannon revealed he’d been subpoenaed by the grand jury when he met with lawmakers Tuesday behind closed doors on Capitol Hill, where he was questioned for more than 10 hours.

While the White House has dismissed much of Wolff’s book as a fiction, and journalists and observers have pointed out many inconsistencies, Trump’s reaction to Bannon’s reported comments – he’s currently suing his former employee – has fueled speculation that at least the president believes that some of the reported remarks are true.

Now, the question is what will Bannon tell the Grand Jury? Could he possibly provide the long-sought “smoking gun” that will definitively prove that Trump campaign officials actively worked with the Russian government to sway the election?

After more than a year of fruitless searching, that scenario seems unlikely.

Goldman Sach’s #2 Had $1.2 Million Of Wine Stolen From Him

Former CIA Officer: Deep State Is “Terrified” Of Trump” And “Want Him Taken Out”