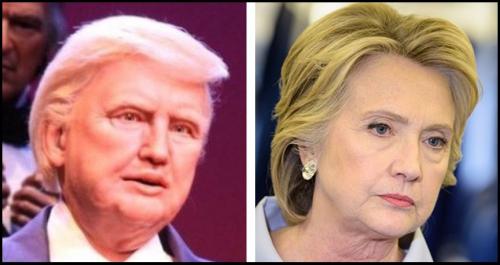 Disney World’s “Hall of Presidents” in Orlando, FL reopens today after the Imagineers at the Magic Kingdom spent a year conjuring up an animatronic Donald Trump. The robo-Prez is flanked by his 43 predecessors as he delivers a speech that’s incredibly creepy if only for its lack of characteristic Trump mannerisms familiar to anyone who’s watched him speak. To Disney’s credit, however, it’s all very patriotic.

“Above all, to be American is to be an optimist — to believe that we can always do better — and that the best days of our great nation are still ahead of us” -Robot Trump

Disney took flak from online conspiracy theorists who suggested that waiting till the end of December to reopen the exhibit was a dig at the White House, considering the timing of Robo-Obama’s July 3rd 2009 rollout, however Disney says they intended to open the attraction in late June, but President Trump had not yet recorded the dialogue for his robot according to a June 27 blog post.

“We have been working closely with the current White House – just as we have with previous administrations – and the president’s recording session has been scheduled,” the blog post said. “Despite some media reports to the contrary, President Trump will have a speaking role.”

Perhaps the delay also had something to do with Disney’s 2009 firing of Valerie Edwards – who was given the boot after 21 years with Disney’s Imagineering division shortly after she sculpted the bust for President Obama’s robot.