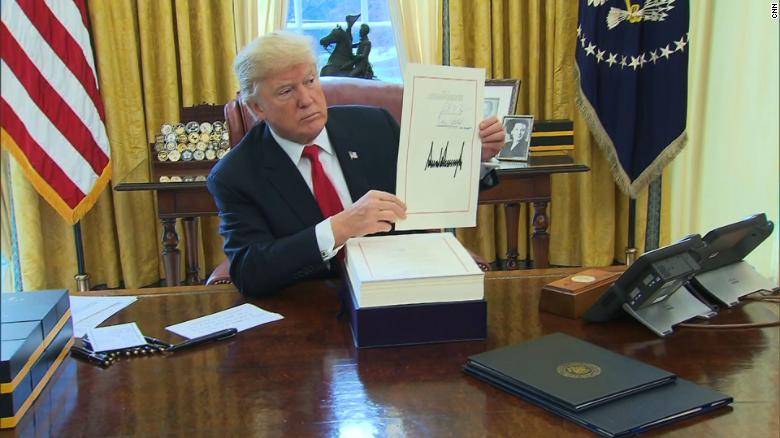 The president allowed the White House press pool to witness the event after he announced his decision on Twitter.

Trump told reporters that he was going to wait until January to sign the bill, but that he was intent on keeping his promise to the American people to sign it by Christmas.

“I watched the news this morning and they were all saying, ‘Will he keep his promise, will he sign it by Christmas?’ … and I called downstairs and said, ‘Get it ready, we have to sign it now,’” Trump said.

“This is something I’m very proud of,” Trump said. “Great for our country. Great for the American people.”

After signing the bill, Trump offered the pens to members of the press in the room.

The president boarded Marine One after the signing event, traveling to Mar-a-lago for Christmas.

While not the biggest tax cut in history, White House staff argues that the tax cuts together with the tax reforms make it the most significant tax policy bill in the history of the United States.

The bill signing was delayed a few days, as Congress had to pass a government funding bill which included a waiver of the pay-as-you-go budgetary rules.

Since Congress included the waivers in their year-end government funding bill, Trump could sign the bill in 2017, allowing many of the tax cuts to take effect by next year.

The president spent most of the morning praising the tax bill and his year-end accomplishments but appeared frustrated that the media was not giving him enough credit.

ANOTHER ONE: Bank of America To Pay $1000 Bonuses to 145,000 American Workers Because of Tax Cuts