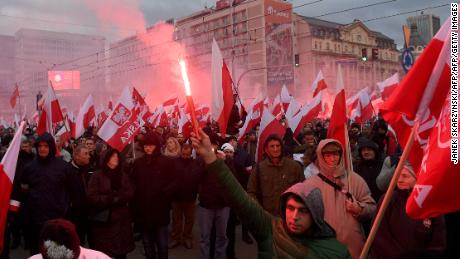 EUROSCEPTIC parties across the continent will keep gaining momentum in 2018, a report by Tony Blair’s think-tank predicts.

The report, commissioned by the ex-Prime Minister, points to the rise of anti-EU parties in Italy, Hungary, Poland and the Czech Republic.

Research found the share of the vote taken by populist parties has almost trebled since 2000, rising from 8.5 percent to 24.1 percent.

Over the same period, the number of European countries with populist parties participating in government has doubled from seven to 14.

The report explained: “In many countries, the trend line suggests that populists will continue to gain strength in the next round of elections.

“Populists could drive European politics into a more nationalist and protectionist direction.

“The basic norms and institutions of liberal democracy would remain intact.

It warned that many of these parties support the “weakening or abolition of international institutions like the European Union”.

In Italy, the institute’s dossier says, the Eurosceptic Five Star Movement is likely to “perform very well in the March 2018 elections”.

The party, which has hinted at holding a referendum on Italy’s Eurozone membership, is soaring in popularity according to opinion polls.

The document also admits Hungary and Poland’s governments, which have both been locked in furious disputes with the EU, “are as popular as ever”.

Hungary has “descended into quasi-authoritarianism” in recent years, it says, while Poland “is already following in these footsteps”.

The report also looks at the rise of left-wing populist parties, such as Labour under Jeremy Corbyn, a fierce critic of Tony Blair’s legacy.

The report’s co-author, Yascha Mounk, said: “2016 was the year that populism went prime time, but as our data makes clear: this rise started well before 2016.

“This populist wave has not crested and unless politicians managed to identify and counteract the structural drivers, populism will keep garnering strength in the years to come.”