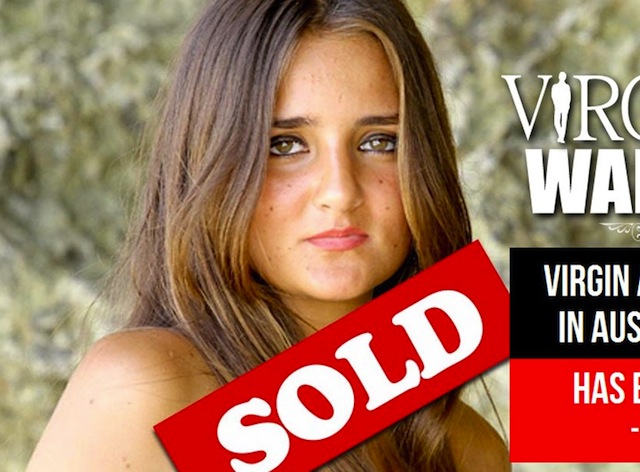 Another broke millennial, stuck in the gig economy – where wage stagnation has drowned out any hopes for a better life, is selling her virginity online to the highest bidder…In recent years, broke millennials have been selling their ‘assets’ online to pay bills or cover college expenses. Last November, we reported on one unconventional dating website called SeekingArrangement.com, where upwards of 2.5 million millennials could be selling sex for their next debt payment.


Her pitch: she is a ‘good girl’ gone bad, and says she’s selling her virginity after giving up on marriage following a rough breakup.


According to the Mirror, Gibson grew up with Christian foster parents in a gated community in the suburbs of Sacramento, California. Her childhood was very sheltered from the outside world, but something snapped when her ex-boyfriend cheated on her.


In a blog post she tries to explain herself:


I learned that love can be deceiving when I discovered that he slept with his ex on Valentine’s Day, however. Being the naive 19 year old that I was, I thought that if I stayed with him and we enrolled in couples therapy, I could make our relationship right again.


At that point I had virtually nobody and my ex-boyfriend brought me companionship. So, I stayed. Foolishly. Only to be heartbroken after one of our couples therapy sessions when I found out that he had already met and slept with someone else – on their first date no less.


After grieving for a while, I came to the conclusion that waiting until marriage to lose my virginity was the wrong decision, because my ex-boyfriend wasn’t worth waiting for.


Bailey added, “I wanted to lose my virginity in the most profitable way possible.”


She then contacted Dennis Hoff, who runs the Bunny Ranch. It’s unclear where Bailey’s virginity has been priced at, but nevertheless, Hoff stands to earn 50 percent of the winning bid.


Further, Baily clarifies why selling her virginity online is the trendy thing to do:


Society perceives me as a deviant, and I am okay with that. At the end of the day, it is my body. I have the right do what I want with it.


Going through the Bunny Ranch allows me to legally have sex for money. Does this make me a prostitute? Gasp! Meh, I don’t know. If you take a picture once, does that make you a photographer?


As explained by UBS strategist Matthew Mish, millennials have never been more in debt and this shocking development could hint why millennials are selling their virginities and or resorting to unconventional dating websites, in the millions to trade sex for the next debt servicing payment.


As Mish points out in the Figures below, the median debt-to-asset ratio for Americans under the age of 35 has gotten out of control.


With the financial security of the millennial in grave danger, as per UBS strategist Matthew Mish’s charts, we start to get a sense for why the millennials are auctioning off their ‘assets’ to the highest bidder; they are simply broke.