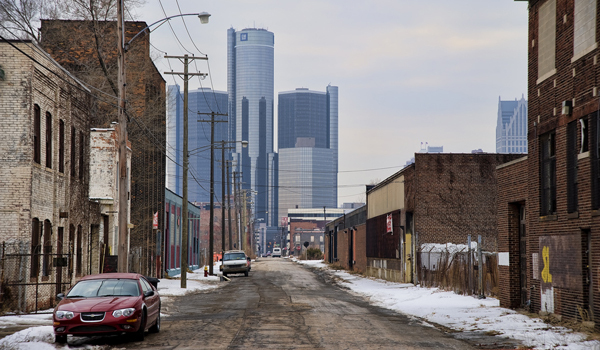 The stories coming out from Chicago and Baltimore paint an increasingly pessimistic picture: that America’s inner cities are transitioning into a warzone, where violence has returned to levels not seen since the drug wars of the early 1990s.

Take for example Chicago, five men were killed and at least 20 people shot over the four-day Christmas holiday weekend. Last year, 59 people were shot over the same period, leaving 11 dead.

Across the United States, homicides rose about 9% last year with more than one-third of the increase concentrated in Chicago neighborhoods, according to the Federal Bureau of Investigation (FBI). Despite the overall deterioration of American inner cities, there was some improvement in areas such as Los Angeles and Washington, D.C., where declines in violent crimes have been in downward trajectories since the 1990s.

According to the WSJ, soaring homicides in Chicago and Baltimore share wide wealth inequality rates, de-industrialization, depleted residential real estate, and a reduction of police officers following the Ferguson effect in 2014. Nevertheless, the opioid crisis is fueling much of this death and despair in the inner cities, trapping the younger generations into a perpetual world of crime.

Meanwhile, in Washington and Los Angeles, “gang interventions and community policing,” which explores ways to strengthen the community have led to a long-term reduction in homicides. The article brings up the dreaded word gentrification, while it has worked in Washington to suppress crime, it has certainly not been effective in Chicago and or Baltimore.

David Weisburd, a criminologist at George Mason University said about 1% of city streets contributes to 25% of a city’s crime, and 5% of the streets produces half the crime. He coined the phrase the “law of crime concentration.”

In Chicago, half the violent crime came from five neighborhoods, including West Garfield Park, exemplifying Weisburd’s theory. In fact, crime in the area has surged to levels not seen since the “drug wars fueled by the crack-cocaine epidemic” of the 1990s.

As the WSJ adds, “violence in Chicago erupted last year, with the city recording 771 murders—a 58% jump from 2015. The third largest city in the U.S. with 2.7 million people, Chicago had more murders than New York and Los Angeles combined.” Violent crime in Chicago is concentrated in just a handful of neighborhoods, where inequalities are wide and it’s not just in wealth.

WSJ interviewed Amarley Coggins who started dealing drugs aged 12. A decade later, he sits in jail for “felony drug charges and possession of a weapon”.

Amarley Coggins remembers the first time he dealt heroin, discreetly approaching a car coming off an interstate highway and into West Garfield Park, the neighborhood where he grew up on Chicago’s west side. He was 12 years old and had just been recruited into a gang by his older brothers and cousin.

A decade later, he sits in Cook County jail, held without bail and awaiting trial on three cases, including felony drug charges and possession of a weapon. “I have a lot of friends who didn’t make it to 22,” said Mr. Coggins, who hasn’t entered a plea. “I want to stay alive for my son and my family.”

“Baltimore City has a lot of people walking around that have committed homicides and shootings,” said former deputy police commissioner, Tony Barksdale. Meanwhile community leaders and former police members warn that police have disbanded proactive operations to combat crime since the April 2015 riots:

Some community leaders and former police officials say police have pulled back from a more proactive approach on the street since April 2015, when riots erupted after Freddie Gray, a 25-year-old black man, died from a broken neck he sustained in a police van. Officers had chased Mr. Gray from North and Pennsylvania, a known drug corner, and arrested him for allegedly possessing an illegal knife.

A police department spokesman said foot patrols have increased because now officers are mandated to walk through neighborhoods in the first months of field training, which wasn’t the case a few years ago.

“You look at Baltimore’s crime numbers, that’s criminals taking advantage of weakness,” Mr. Barksdale said. He further said: “I am against mass arrests, but you still need arrests.”

JPMorgan Chase funds the Racial Wealth Divide Initiative at CFED, and warns an astronomical amount of Baltimore citizens have a net worth of zero; the racial divide and wealth inequality is among the highest in the country, contributing to high levels of violent crime.

Ericka Alston-Buck, who runs a youth center blocks from where Mr. Gray was arrested in 2015, says the violence is tied to poverty that hasn’t eased since the riots. “You have to be here to feel the blight, the vacant houses, the cat-sized rodents that run through the streets, the open-air drug markets, prostitution, no grocery store,” she said.

Jacqueline Caldwell, a local resident who leads a nonprofit umbrella group that includes several west-side community associations, said the police have become nonexistent over the past two years. “I don’t think it takes a rocket scientist to figure out we need more police on the street, more community involvement with the police,” Ms. Caldwell said.

John Skinner, a former deputy police commissioner who retired in 2014, said after the riots, police feared “another triggering effect.” He said while he thinks the retreat from proactive policing was brief, its effects were lasting. “Violence can escalate really, really rapidly. When it occurs it’s tough to get that stabilization back,” he said.

The sad conclusion is that the inner-city playgrounds of the establishment elite, Chicago and Baltimore, have been let to fail. The decades-long experiment is now resulting in a war zone that is progressively getting worse, not better, despite recurring narratives to suck in poor millennials for revival purposes. As a country, it’s time to take two steps back and reflect on the failures before we taking any more steps “forward” otherwise the situation will only get worse.