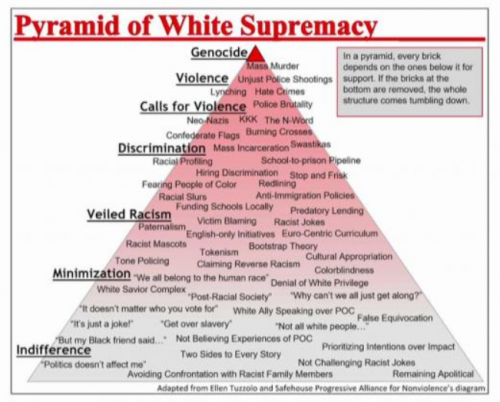 A course at Salisbury University in Maryland is using a “Pyramid of White Supremacy” to help teach students about diversity and “cultural competence.”

The one-credit course, “Diversity and the Self,” is a required class for any student hoping to obtain an elementary education major.

The pyramid ranks various concepts on different levels according to severity, with “Indifference” forming the base of the pyramid and “Genocide” residing at the top.

“In a pyramid, every brick depends upon the one below it for support,” an accompanying caption explains. “If the bricks at the bottom are removed, the whole structure comes tumbling down.”

Things like “avoiding confrontation with racist family members,” “remaining apolitical,” or saying “politics doesn’t affect me” make up the base of the Pyramid of White Supremacy, directly underneath forms of “minimization” such as “denial of white privilege” and “not believing experiences of POC [people of color].”

The next level up is “veiled racism,” which the graphic defines to include “cultural appropriation” and a “Euro-centric curriculum.”

Worse still, according to the pyramid, are “anti-immigration policies,” “stop and frisk” policing strategies, and “funding schools locally,” all of which fall under the category of “discrimination.”

Above that the pyramid lists “calls for violence” such as “swastikas,” “Confederate flags,” and “the n-word,” followed by actual acts of violence like “unjust police shootings,” “lynching,” and all other hate crimes.

“We had to study the pyramid and also take a group quiz,” a student in the class who wishes to remain anonymous told Campus Reform, noting that the placement of certain elements on the pyramid raised eyebrows.

“I find it ridiculous that ‘unjust police shootings’ is at the top of the list next to mass murder and genocide,” the student remarked. “The pyramid was not only biased, the way they ranked the events did not make much sense.”

According to the syllabus, the course “reviews theories and aspects of cultural competence most relevant to teaching in diverse classrooms,” and “explores the ideals of freedom, democracy, justice, equality, equity, and human dignity from the perspective of the individual.”

“This class was extremely difficult to get through if you did not think like a liberal. Instead of teaching diversity, this class taught us that being white was a bad thing,” the student complained. “We were told that we were only privileged because we are white and basically we did not actually work for what we have.”

Erin Stutelberg, the professor teaching the course, practices what she preaches outside of the classroom, as well. On her Facebook page, her display photo is a picture of her with a sign saying: “White Silence = Violence.”

Campus Reform reached out to Stutelberg for comment, but has not received a response.

L.A. Got Billions For “Homeless Initiative”; Where Did The Money Go?

Hungary Introduces “Stop Soros” Because Of Illegal Migrants, Vowing To “Fend Them Off Any Means Necessary”