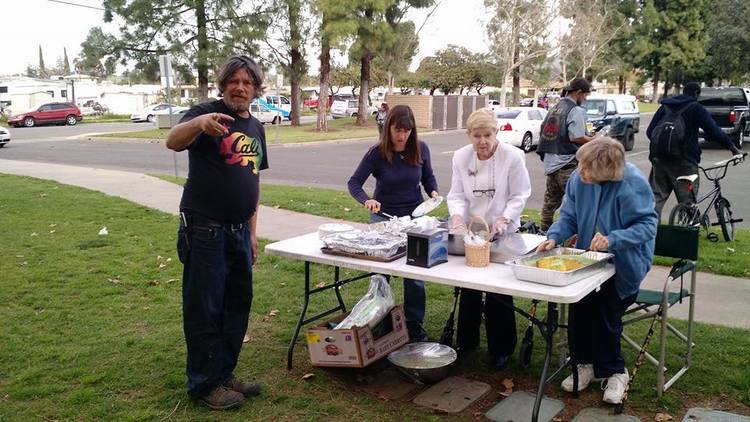 El Cajon police officers arrested about a dozen people for feeding the homeless at a city park Sunday afternoon.

The event was organized by a group called Break the Ban, which formed after the El Cajon City Council unanimously passed an emergency ordinance in October prohibiting the distribution of food on any city-owned property.

City officials said the ordinance was a way to protect the public from hepatitis A, but critics have called it a punitive measure to dehumanize and criminalize the homeless.

Mark Lane, one of the event’s organizers, said about 12 to 15 people were passing out food and toiletries to the homeless at Wells Park on East Madison Avenue when police arrived.

About 40 more people, including several lawyers, also were there, but not actively passing out food. Some of those carried signs that had slogans like “Feeding the hungry is not a crime.”

While the event was intended to feed members of the homeless, it was also part of the group’s plan to legally contest the ordinance.

“It was absolutely necessary to beak this law until they were willing to enforce it, and, now that they have, we will continue this fight in court,” said another organizer, Shane Parmely.

It’s a familiar legal strategy that played a critical role during the civil rights movement and other social justice movements, Parmely said.

According to a video Parmely shared on Facebook, a police officer explained to the crowd that the city council had banned food sharing on public property.

“This park is part of city property so you aren’t allowed to food share,” the officer in the video said. “…If you guys continue to food share, then you guys are subject to arrest, all right?”

Everyone who was handing out food, including a 14-year-old child, was arrested, given a misdemeanor citation with a date to appear in court and released. No one was taken away in handcuffs.

In the video, one officer can be heard explaining the citation was for failing to comply with a municipal ordinance as well as an emergency order recently passed by the city.

An El Cajon police lieutenant was unable to comment on the arrests, saying the city would handle all inquiries.

Lane said Break the Ban will continue to organize events to feed the city’s homeless. Sunday’s event was the second hosted by the group.

They have partnered with a second group called Food Not Bombs that has also hosted two food-sharing events. Another is planned for Jan. 27 at Wells Park.

“Our goal it to get the ban overturned and sit down and figure out how to humanely deal with something that’s not going away,” Lane said.

1/5 California Residents Are Poor, Making It The Worst In the Nation