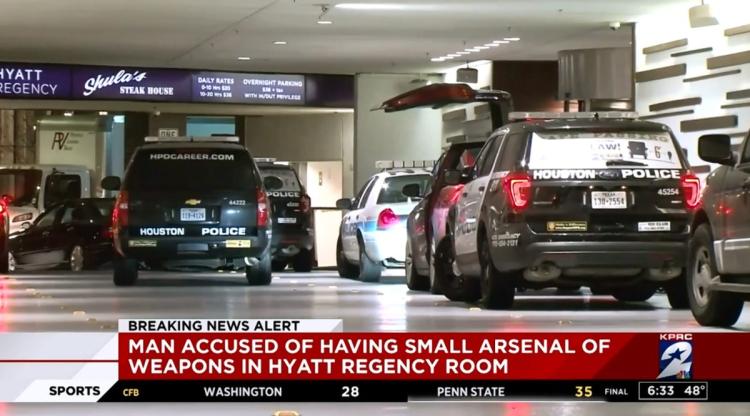 (Via The Houston Chronicle)

Houston police uncovered a small stash of weapons and ammunition Sunday morning after showing up to arrest a drunk man at a downtown hotel that hosts one of the city’s largest New Year’s Eve parties.

After hours of investigating, police charged the man, identified as Russell Lawrence Ziemba, 49, with assaulting a peace officer and trespassing.

“This was not Las Vegas,” said an official familiar with the case. “There was not an arsenal.”

Chief Art Acevedo took to Twitter to reinforce that sentiment.

“Situation from this morning at downtown hotel is contained,” he wrote. “No specific threats.”

Staff at the Hyatt Regency Houston initially called for police around 1:30 a.m. for help handling a highly intoxicated man at the hotel bar.

At first, security at the 1200 Louisiana hotel tried sending the argumentative guest to his room, but he started fighting with them, officials said. So security called the Houston police.

The first officer planned to arrest him for trespassing, but discovered the man was drunk and belligerent.

While gathering up the suspect’s belongings, police reportedly found an AR-15, a shotgun and a handgun, with many rounds of ammunition. But it wasn’t immediately clear why Ziemba brought guns and ammo to the hotel, and investigators had to wait for the alcohol to wear off before getting answers.

“He’s intoxicated so they won’t be able to interview him till he’s sobered up a bit,” Lt. Gordon Macintosh said early Sunday. The FBI confirmed it assisting with the case, but declined to offer any statement.

“Based on limited amount of ammunition, interview and other investigative findings no unlawful intent found,” Acevedo tweeted just after 2 p.m.

An official familiar with the case said it appeared all three guns were legally owned, despite earlier reports to the contrary. Ziemba didn’t make any threats, the official said.

Hyatt officials said the hotel will still hold its New Year’s Eve party featuring a 50,000-balloon drop at midnight from the top of a 33-story atrium. About 2,000 people are expected to attend.

“The safety and security of our guests and colleagues is our top priority, and consistent with the hotel’s prepared security plans, heightened measures are in place on New Year’s Eve,” hotel manager Tom Netting said in a statement. “We are fully cooperating with authorities on an investigation, and further questions should be directed to the Houston Police Department.”

One Hyatt guest who said he observed the arrest said the hotel didn’t tell him anything about the incident, though the police presence didn’t have much impact on the lobby crowds as patrons came back from nearby bars.

“There wasn’t a big disruption,” said 32-year-old Zedshan Zakir, who had returned from a wedding reception when he spotted a man in cuffs on one side of the atrium.

By mid-morning Sunday, the police presence had died down and the Hyatt lobby was quiet even as the hotel geared up for a big night ahead.

“Heightened security measures, including support from local authorities, are in place and will continue through the hotel’s New Year’s Eve celebration this evening,” the company said in a statement.

Acevedo said Sunday that police and SWAT teams will be heavily deployed throughout the city.

“Proud of officers & Hyatt,” he wrote. “As always be vigilant & report suspicious activity to authorities.”

With amped up security, Houstonians went about their days downtown, some still making plans to attend the celebration.

Kelly Perseud said she anticipated turning out for the hotel’s festivities as she has in years past.