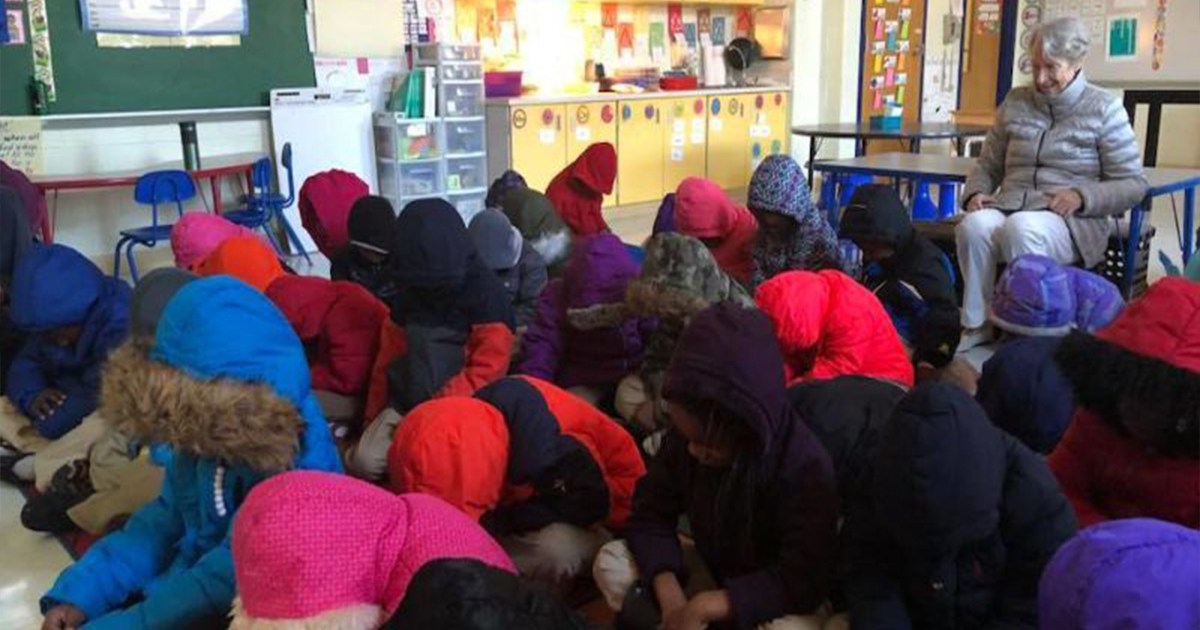 Last week, while the “bomb cyclone” raged above the East Coast, schools across the northeastern and southeastern United States were forced to close due to the dangerous winter weather. But that was not the case for Baltimore schools, where as we discussed the school system remained open during the first half of the week despite the widespread heating failures that caused many classrooms across the city to barely print above 40 degrees.

“It was miserable. The kids had their coats, hats, and gloves on all day,” said Jesse Schneiderman, a social, studies teacher at Frederick Douglass High School.

However after a social media storm erupted as angry parents, community leaders, and even teachers voiced their concerns about the inhumane conditions, Baltimore school administrators decided to close school doors on Thursday and Friday.

A former NFL linebacker turned Baltimore elementary school teacher Aaron Maybin published a video on social media of his students discussing the freezing conditions in their classroom. “What’s the day been like for you today?” Maybin asked. The children, who were seen huddled together on the floor replied “Cold!”

Shortly after Maybin’s video went viral, he asked people on Twitter to donate to a GoFundMe page started by a Coppin State University student who says the proceeds will be used to buy heaters for Baltimore teachers to use in their classrooms. The student, Samierra Jones set a goal of $20,000 to fund the schools with heaters, but in four days, the page has raised more than $73,000, well over the initial goal by many folds.

Heating problems emerged as parts of boilers broke and pipes burst in some schools, she said, adding that “old conditions of our buildings” certainly doesn’t help the situation.

Almost 60 schools or about one-third of the school system reported heating problems during the school day.

Santelises released a statement to CNN on Thursday explaining: “too many of our buildings have outdated heating systems, poor insulation, and aging pipes as a result of years of inadequate funding for maintenance and facilities improvements.” She further said:

“We will continue to close schools when conditions inside buildings are unsafe or unhealthy, or when weather outside makes travel to and from school unsafe for students and staff,” she said. “We are monitoring conditions in all schools closely and are receiving regular updates on the weather forecast, which now includes an increased

likelihood for snow tomorrow (Friday). “Announcements about school closures or delays will be made as soon as possible.”

In her Facebook Live stream Wednesday — the day before the system closed all schools — Santelises said shutting classes systemwide isn’t an easy decision — in part because many students get their meals at schools.

And if schools shut, it’s not a given that students will have supervision at home, she said.

Maryland Gov. Lawrence J. Hogan Jr. “believes that no child should be forced to endure uncomfortable or dangerous conditions in their schools,” his spokeswoman Amelia Chasse told CNN on Thursday.

“Our administration has provided record funding for K-12 education every year since taking office, including an additional $23 million on top of formula funding for Baltimore City schools last year, and has also increased school construction funding for the city each year,” Chasse said. “While individual school facility decisions are ultimately made at the city level, the governor will continue to work closely with Baltimore City leadership to provide any possible support.”

Meanwhile, according to Project Baltimore, Baltimore City is spending $1,630 per student on administrative costs, which is the highest in the United States for a public school system. The one question everyone should ask: where does all the money go?

U. of Michigan Addresses: ‘How To Deal With Being White’