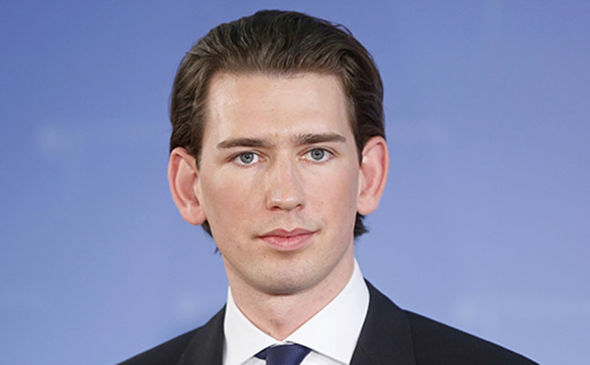 The Conservative People’s Party (OVP) and the far-right Freedom Party (FPO) both ran their campaign on an anti-migrant policies.

And the new government has quickly rolled out a series of migrant rules for those arriving in the country.

Money will also be taken from migrants and put towards the cost of caring for people arriving in the country.

And benefits will be stopped for some migrants who have not yet “paid into” the country.

The changes were outlined in a 180-page document written by the OVP and FPO.

The partnership promised to do “much better” to combat issues regarding migration but said “nobody had anything to fear”.

On benefits, 31-year-old new Chancellor Sebastian Kurz said: “It will no longer happen for migrants who have never worked here a single day or paid anything into the social system to get thousands of euros in welfare.”

Thousands of people took to the streets to protest the new government during the swearing-in ceremony in the capital of Austria.

Police said 6,000 people gathered in Heroes Square, where they chanted “refugees welcome” and “no Nazi pigs”.

During the swearing-in ceremony Austrian president Alexander Van der Bellen said: “Working with the weakest shows what our values are really worth.”

Mr Kurz will now travel to Brussels to meet EU chiefs alarmed at the far-right presence in Austria’s government – its only stronghold in Western Europe.

However the young Chancellor has ruled out a vote on an EU referendum and urged the government to be pro-Brussels.

He has, however, already rejected the EU’s migrant quota, joining Hungary and Poland in a stand-off with the bloc.