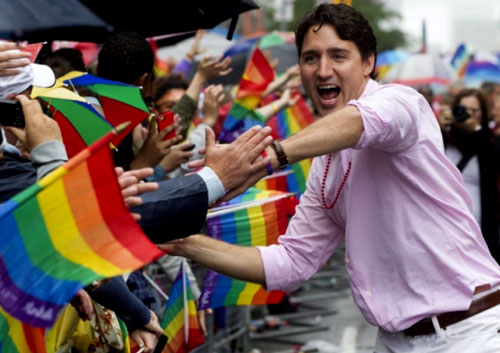 OTTAWA, December 14, 2017 (LifeSiteNews) – The Liberal government of Justin Trudeau will ban any employer from receiving summer job grants for students if the employer doesn’t first sign an “attestation” that they agree with abortion and transgender “rights.”

The new criteria were sent to all MPs and will be made public when the Canada Summer Jobs Program officially opens December 19, 2017.

In order to receive federal Canada job grants, employers must attest that:

both the job and the organization’s core mandate respect individual human rights in Canada, including the values underlying the Canadian Charter of Rights and Freedoms as well as other rights. These include reproductive rights and the right to be free from discrimination on the basis of sex, religion, race, national or ethnic origin, colour, mental or physical disability, sexual orientation, or gender identity or expression.

Conservative MP Brad Trost was first to publicly raise the alarm in a twitter and Facebook video in which he denounces the Liberals for discrimination.

“In practical terms, this means you have to be with the Liberal Party position on abortion, gay marriage, transgendered rights, all sorts of legislation in the House of Commons, otherwise you will be an ineligible employer for this program,” Trost said.

Canadians “are allowed to have different political beliefs than the government of the day and they shouldn’t have their funding be cut off because they disagree with the government,” he added.

“The second problem with this is it automatically excludes all faith-based organizations that are traditional on their values of human life and sexual morality. That includes millions and millions of Canadians,” Trost said.

The Liberal move has also been denounced by Campaign Life Coalition, which has launched a petition.

“This is a jaw-dropping act of discrimination against faith-based employers and non-profits. Although the Trudeau Liberals have signaled many times they have special contempt for Christians, this new policy requires a massive negative reaction from all faith-based communities in Canada – Christian, Jewish, Muslim, Sikh, etc,” he told LifeSiteNews.

“More and more, Justin Trudeau is transforming the Liberal Party into a hate group against Christians. Just recently, the Liberals were scared off from his plan of eliminating the law that protected Church worship services from disruption. Now this. It’s abundantly clear the Trudeau Liberals hate Christians,” he added.

Non-profit groups, small businesses, and public sector employers can apply for funding through Canada Summer Jobs program to create jobs for students from 15 to 30 years of age.

Formerly, it was up to individual MPs to assess and approve funding applications from groups in their ridings.

But Trudeau Liberals already decreed last year no Liberal MP could approve Canada Summer Job funding for pro-life groups. Moreover, Liberal Minister of Employment, Workforce Development and Labour Patty Hajdu said at the time through spokesman Matt Pascuzzo that she would change the program to make sure no pro-life group would be approved in the future.

“We have been unequivocal in our support for a woman’s fundamental right to choose,” Pascuzzo said then.

Alliance for Life Ontario and the Canadian Center for Bioethical Reform were among pro-life groups cut off from Canada Student Job funding in 2017.

Pro-family leaders have warned Christians will face increasing economic and political pressure to conform to the pro-abortion, pro-homosexual ideology, including the possibility of having to sign on to a declaration supporting human “rights,” such as abortion and homosexuality.

“This is no minor tweak to a federal program. This is a ground-breaking first step on the inevitable path to raw totalitarianism and open persecution with the sanction of the state,” he told LifeSiteNews.

“Once the government implements this unconstitutional, anti-Christian policy, the next thing will be that the private sector will take it as permission to do the same thing,” Fonseca warned. “Perhaps first with supplier contracts. But eventually, private sector employees will be required to sign such a declaration which essentially, is a way of getting Christians to disavow their beliefs.”