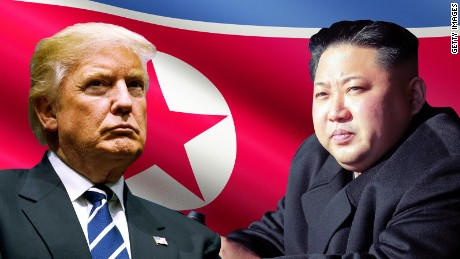 According to a report from The Telegraph, the Trump Administration is “dramatically” bolstering military capabilities and presence in the area in case diplomacy doesn’t deter crazed dictator Kim Jong-un from following through on his continued threats.

One option is destroying a launch site before the rogue regime uses it for a new missile test, while another is targeting weapons stockpiles, according to the news outlet.

The Trump administration hopes that pre-emptive action would show the trigger-happy dictator that the United States is serious about stopping his bellicose pursuits and persuading him to negotiate.

The sources cited in the Telegraph report are all anonymous, but are said to include two officials “familiar with White House thinking” and a current administration insider.

“The Pentagon is trying to find options that would allow them to punch the North Koreans in the nose, get their attention and show that we’re serious,” said a former security official.

“The current plans indicate that Trump is more willing to use a military option than previously thought,” notes the Post.

In an interview with The Atlantic last week, Sen. Lindsey Graham (SC-R) estimated there was a 30% chance the U.S. would take military action against the rogue nation, but noted that such a percentage would spike to 70% if the despot conducted another nuclear weapon test (their seventh).

“I don’t know how to say it any more direct: If nothing changes, Trump’s gonna have to use the military option, because time is running out,” said Graham.

During the same interview, the senator dismissed the idea of a “surgical strike.”

“War with North Korea is an all-out war against the regime,” he told The Atlantic. “There is no surgical strike option. Their [nuclear-weapons] program is too redundant, it’s too hardened, and you gotta assume the worst, not the best. So if you ever use the military option, it’s not to just neutralize their nuclear facilities — you gotta be willing to take the regime completely down.”

In September, the North Korean regime tested their sixth nuclear weapon, and just last month, they test-fired an intercontinental ballistic missile capable of hitting anywhere in the U.S. “The missile was reportedly fired at 3 a.m. local time, and flew for fully 50 minutes, on a lofted trajectory that actually sent it 10 times higher than the orbit of NASA’s International Space Station; it came down 1,000 km from Japan’s West Coast, in Japan’s exclusive economic zone,” reported Daily Wire Editor-in-Chief Ben Shapiro.

BLOWBACK? 100,000 Person Force That Helped Defeat ISIS May Turn Against Us