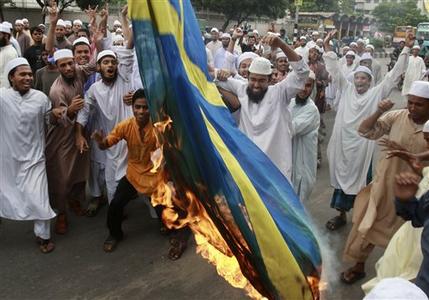 The Swedish city of Helsingborg has seen a steep rise in shootings, with fatalities in three of the 20 cases recorded in 2017.

In 2016, there were only five shootings in the city which lies on the south-west coast only miles from neighbouring Denmark. In less than a year, the number of shootings had surged to 20, in the city of less than 100,000 inhabitants — a number of attacks unheard of until recently in the formerly peaceful Scandinavian nation.

In almost all of the cases, the victims of the shootings were young men in their 20s and police believe them to be linked to organised crime, Swedish broadcaster, SVT reports.

“It’s our local criminal networks that shoot each other and the reasons are for money, drugs, and weapons. These are the three ingredients,” said local police district manager in Helsingborg Sven Holgersson.

Holgersson added that solving the crimes has been particularly difficult because many involved refuse to speak to police.

“Although we spend thousands of hours investigating these crimes, nobody wants to talk to us. No one has heard or seen anything. We are dependant on the witnesses and for someone to tell us what has really happened,” he said.

Two of the three fatal shootings occurred within two weeks of each other. On May 13th, a 24-year-old was found shot and injured and later died of his wounds. Police had to drop the case due to a lack of leads.

The second shooting, which saw a 25-year-old fatally shot in the head, was also dropped by police and no one was arrested for the murder.

Statistics from the National Board of Sweden’s Cause of Death register show that the number of fatal shootings in Sweden has doubled in the previous nine years.

Shootings and criminal violence have become particularly bad in the heavily migrant-populated no-go zones in places like Malmö and the Stockholm suburb of Rinkeby.

Rinkeby was described by Swedish Chief Prosecutor Lise Tamm late last year as a “war zone“. Tamm, who became the acting head of Sweden’s anti-organised crime unit this year, said she had examined how countries like Colombia had dealt with insurgent guerillas to find solutions to dealing with the violence in the no-go zones.

Police have also been targets of violence in recent months. In Helsingborg itself, a police station was bombed in October and shortly after, a police car was attacked by a man wielding a hand grenade in Uppsala.