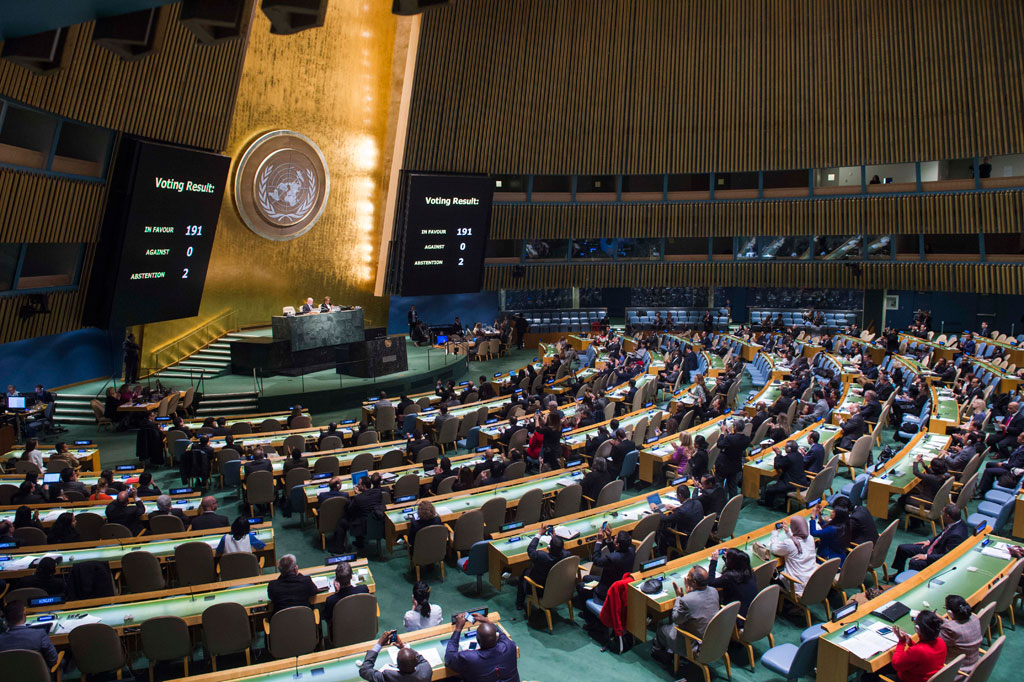 One day after Trump escalated his war of words with the UN, threatening to cut off foreign financial aid over today’s UN vote on the president’s decision to recognize Jerusalem the capital of Israel, the United Nations on Thursday delivered what has been dubbed a “stunning rebuke” of the US President’s Jerusalem decision, voting overwhelmingly to condemn the move and calling on the U.S. to withdraw the decision.

The final vote was a landslide against Israel, with some 128 nations voting in favor of the resolution. Nine countries opposed the resolution while 35 abstaine

While the resolution – a formal statement of a U.N. opinion – is not legally binding, it is represents a symbolic and diplomatic condemnation of Trump’s decision and exerts political pressure on him to reverse the move… which Trump of course won’t do.

As reported yesterday, in the runup to the General Assembly vote, Trump and US Ambassador to the UN, Nikki Haley, warned countries against opposing the Trump administration’s Jerusalem decision. Haley went so far as sending a letter to members of the international body this week, warning that Trump had instructed her to take names, i.e., list the countries that voted in favor of the resolution. The president followed up on that warning on Wednesday, suggesting at a Cabinet meeting that the U.S. could cut off foreign aid for countries that opposed the U.S. in the vote.

The threat did little to stop the countries from voting to blast Trump’s decision.

The outcome of the vote was hailed as a “victory” by Palestine. “We will continue our efforts in the United Nations and at all international forums to put an end to this occupation and to establish our Palestinian state with east Jerusalem as its capital,” Abbas’ spokesman Nabil Abu Rudainah said.

And, predictably, both Israel and the US were displeased (see below).

The General Assembly vote came days after the U.S. vetoed a similar resolution in the U.N. Security Council. The panel’s other 14 members voted in favor of that measure – a move that Haley called an “insult” to the U.S. Shortly after the Security Council vote, Arab and Muslim leaders at U.N. called for an emergency special session of the General Assembly to discuss the U.S.’s Jerusalem decision.

In a defiant speech ahead of the General Assembly vote on Thursday, Riyad Al Maliki, the Palestinian foreign affairs minister, cast the Trump administration’s Jerusalem decision as an affront on regional peace and security that has isolated the U.S. from the international community. “Does the United States not wonder why it stands isolated in this position?” he asked.

Turkey, which has led the Muslim opposition to the US Jerusalem declaration, was among the first to speak at the meeting. Turkish Foreign Minister Mevlut Cavusoglu stressed that only a two-state solution and sticking to the 1967 borders can be a foundation for a lasting peace between Israel and Palestine. The minister said that since Jerusalem is the cradle for the “three monotheistic religions,” all of humanity should come together to preserve the status quo.

“The recent decision of a UN member state to recognize Jerusalem as the capital of Israel violates the international law, including all relevant UN resolutions. This decision is an outrageous assault on all universal values,” Cavusoglu said.