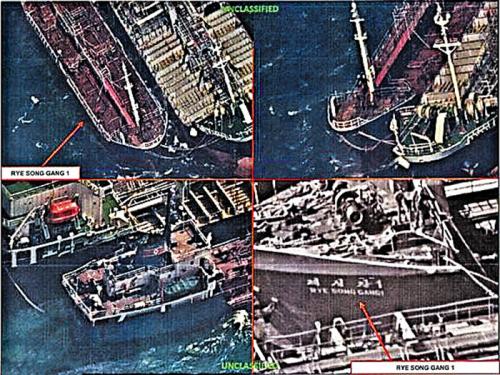 According to South Korea’s Chosun Ilbo, U.S. recon satellites have photographed around 30 illegal transactions involving Chinese vessels selling oil to North Korea on the West Sea in October. The images allegedly showed large Chinese and North Korean ships transacting in oil in a part of the West Sea closer to China than South Korea. The satellite pictures even showed the names of the ships.

Back in November, the US. Treasury Department sanctioned an additional six North Korean shipping and trading companies and 20 of their ships after the satellite pictures surfaced. In the above picture, the North Korean ship named Ryesonggang 1, was easily identified and connected to the illegal sale of oil from China.

According to Chosun Media, “the department noted that the two ships appeared to be illegally trading in oil from ship to ship to bypass sanctions.”

Ship-to-ship trade with North Korea on the high seas is forbidden in UNSC Resolution 2375 adopted in September, but such violations are nearly impossible to detect unless China aggressively cracks down on smuggling.

Last month, the Communist Party spokespeople slammed new US sanctions targeting Chinese traders doing business with North Koreans, calling them “wrong”. At this point, it’s still unknown if the Chinese government is turning a blind eye to the illegal open sea transactions with North Korea, but as of today it seems as a blatant snub to the Trump administration.

Meanwhile, as President Trump and the US celebrate last week’s latest round of new sanctions for North Korea at the UN, the likelihood of illegal smuggling routes between the two countries will surely expand. The question then is with all diplomatic avenues exhausted and China violating a UNSC resolution, what happens next?